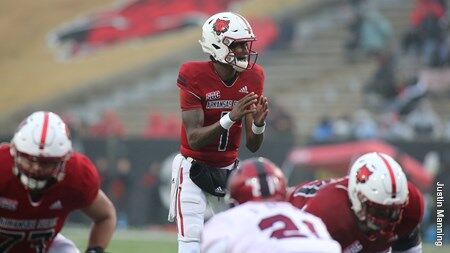 JONESBORO, Ark. (11/26/22) – The Arkansas State football team could not overcome a fourth-quarter surge by Troy on Saturday at Centennial Bank Stadium, falling 48-19 to the Trojans in the season finale.

James Blackman completed 20 of 35 passes for 220 yards in his final contest, while AJ Mayer completed his lone pass for a 1-yard touchdown to Reed Tyler in the third quarter.

Defensively, Melique Straker led all players with 10 tackles while Kivon Bennett tallied two sacks as part of an eight-tackle performance.

A-State struck first on a 20-yard field goal by Dominic Zvada set up by a 69-yard interception return by Samy Johnson. Johnson’s pick gave the Red Wolves 1st-and-goal on the Troy 2 to halt the Trojans’ opening drive. Troy later took a 7-3 lead when a 1-yard rushing score by Kimani Vidal capped a 14-play drive that took 6 minutes, 24 seconds off the clock, giving the Trojans a 7-3 lead after the opening quarter. Vidal rushed for 208 yards on 33 carries with four scores.

Zvada tacked on a 21-yard field goal with 6:37 to go in the half to pull A-State within one. The freshman kicker finished 17-of-18 on the year and broke the school record for points by kicking by a freshman. His 81 points moved him past Blake Grupe, who scored 77 as a freshman in 2018, and are the most by a true freshman in Sun Belt Conference history.

After the teams traded punts, Bennett forced a fumble, which TW Ayers fell on at the Troy 33. Three players later, Blackman scampered 30 yards into the end zone, giving the Red Wolves a 13-7 halftime lead.

Troy reclaimed at 14-13 lead when quarterback Gunnar Watson linked up with RaJae’ Johnson for a 21-yard strike to cap a 10-play, 94-yard drive with 4:49 to go in the third. Watson completed 9 of 15 passes for 141 yards, while Johnson caught three balls for 101 yards.

A-State answered on its next drive when Mayer found a sliding Tyler in the back of the end zone, putting the Scarlet and Black back ahead 19-14 with one quarter to go.

The Trojans opened the fourth quarter with a 7-yard rushing touchdown by Vidal to reclaim a 20-19 lead. Reddy Steward then returned an interception 67 yards to the end zone, ending an A-State drive and pushing Troy’s lead out to 27-19. Vidal scored two more times on 12 and 39-yard rushes, then Damien Taylor pushed across the goal line from three yards out for the final score of the night.

Read more:
Red Wolves Fall 48-19 to Troy. Article may or may not reflect the views of KLEK 102.5 FM or The Voice of Arkansas Minority Advocacy Council