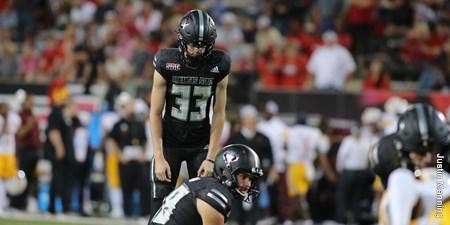 James Blackman completed 22 of 39 passes for 177 yards, with Jeff Foreman hauling in six passes for 98 yards. Seydou Traore led all players with a career-high eight grabs for 47 yards.

Defensively, Jaden Harris racked up a game-high 10 tackles – a season high for the redshirt junior linebacker.

The Jaguars moved down the field quickly on the game’s opening drive with Webb punching it in from 3 yards out. South Alabama scored again at the 4:02 mark when Carter Bradley hit Jalen Wayne for a 49-yard strike. Bradley passed for 179 yards on 17-of-24 while Wayne earned 83 yards on three catches.

Dominic Zvada connected on a 32-yard field goal with 1:24 to go in the quarter and make it a 14-3 South Alabama lead after one. The freshman remained perfect from field-goal range, moving to 13-for-13 on the year. USA then added two more on a safety when Blackman was sacked in the end zone to lead 16-3 at the half.

After a turnover on downs, South Alabama chewed up over 6 minutes of clock on its first drive of the second half and scored when Webb leaped over the pile for the 1-yard touchdown. The Jaguars added a successful 2-point conversion when Bradley connected with DJ Thomas-Jones to make it 24-3 with 5:18 left in the third.

Webb scored for the third time with 1:34 remaining in the contest to put the final score at 31-3.

After nine consecutive games to start the season, A-State is off next week before hosting UMass in non-conference action on Nov. 12. Kickoff against the Minutemen at Centennial Bank Stadium is slated for 2 p.m. CT.

Read the original here:
Red Wolves Fall 31-3 to South Alabama. Article may or may not reflect the views of KLEK 102.5 FM or The Voice of Arkansas Minority Advocacy Council