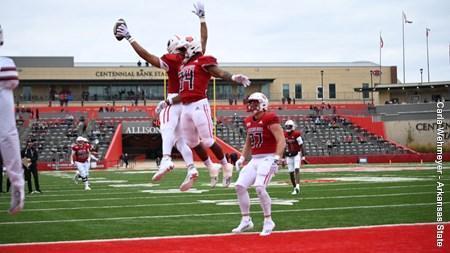 The Red Wolves (3-7) then recovered the onside kick to halt the chances of a fourth-quarter comeback by the Minutemen (1-9), who outscored A-State 14-0 in the final period with hopes of forcing overtime.

A-State, which never trailed, led 14-6 at the half and surged out to its 16-point lead with three scores in the third quarter, including Marcel Murray’s first rushing touchdown since the 2020 season – a 75-yard rush. Murray led all players with 123 yards rushing on just eight carries, averaging 15.4 yards. The Hiram, Ga., native surpassed the 2,000-yard mark for his career, while it was also his sixth time over the century mark and first since rushing for a career-high 175 yards at ULM on Nov. 2, 2019.

On the Red Wolves’ opening drive after forcing a 3-and-out, James Blackman guided the offense on an efficient four-play, 66-yard scoring drive capped by a 17-yard strike to Seydou Traore, who tallied 41 yards on two grabs. Blackman completed 10 of 18 passes for 142 yards and two touchdowns.

UMass then put three on the board when Cameron Carson connected on a 37-yard field goal, his first of two kicks on the day. On the next drive for the Minutemen, A-State’s Trevian Thomas intercepted a Brady Olson pass and returned it 27 yards for the pick-six to give the hosts a 14-3 lead after one quarter. Thomas’ was the first of two interceptions for the Red Wolves’ defense, the other by Jaden Harris, who led all players with a career-high 14 tackles.

Carson tacked on a 36-yard field goal with 35 seconds to play in the half, cutting A-State’s lead at the break to 14-6.

A-State took over on offense to start the second half and once again scored in under two minutes. Blackman completed all three of his passes on the drive, culminating in an 18-yard toss to Te’Vailance Hunt to put the score at 21-6.

UMass chewed up nearly eight minutes of clock on its next two scoring drives. Ellis Merriweather found the end zone for the first of two rushing touchdowns, followed by a touchdown pass from Olson to George Johnson to make it a 21-19 affair. Merriweather rushed for 122 yards on 29 attempts and helped the Minutemen own possession for 41:30.

Murray then answered with his 75-yard scamper on A-State’s next play, then Johnnie Lang Jr. crossed the goal line on a 12-yard rush to widen the gap to 35-19. Merriweather then added a four-yard rushing touchdown and caught a pass from Garrett Dzuro for a successful two-point conversion, making it 35-27 with just over 11 minutes left.

The visitors then took possession with 3:45 remaining and drove 81 yards in 11 plays, scoring on a 27-yard pass from Dzuro to Isaac Ross with 18 seconds to play. On the two-point conversion, Dzuro once again found Ross, who was stuffed by Kenneth Harris just shy of the goal line – one of seven stops for Harris on the day.

A-State returns to Sun Belt Conference play to wrap up the regular season, traveling to San Marcos, Texas, to face West Division counterpart Texas State on Saturday, Nov. 19. Kickoff from Bobcat Stadium is slated for 4 p.m. CT on ESPN3. The contest can also be heard on the EAB Red Wolves Sports Network, including flagship station 107.9 KFIN in the Northeast Arkansas area.

Read more from the original source:
Red Wolves Edge UMass 35-33. Article may or may not reflect the views of KLEK 102.5 FM or The Voice of Arkansas Minority Advocacy Council