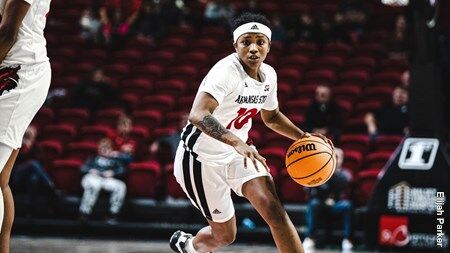 The Red Wolves (4-3) scored 42 points and shot over 75 percent in the game’s first 10 minutes en route to eclipsing the century mark for the first time since Dec. 30, 2015. Six players scored 10 or more points, led by Keya Patton’s 20 points on 8-of-15 from the field off the bench. The Cowgirls (1-6) could not overcome that outburst, while also falling victim to 20 turnovers.

A-State shot 51.3 percent (41-80), including 11 of 29 from 3-point range (37.9 percent), while delivering 28 assists on those 41 baskets. Izzy Higginbottom accounted for a career-high nine assists to go along with 18 points and three steals. Lauryn Pendleton tallied 15 points, seven assists and six rebounds, while Mailyn Wilkerson dropped 12 points on four long-range buckets.

Three players scored in double figures for McNeese State, highlighted by 20 points from Paris Mullins. Divine Tanks added 17 points, while Kaili Chamberlin scored 13. The Cowgirls shot 47.5 percent (28-59) from the floor and made 24 of 34 at the free-throw line (70.6 percent).

A-State hit seven of its first nine shots en route to an early 16-6 lead midway through the opening quarter. The Red Wolves, who connected on 7 of 9 from the perimeter in the period, forced a pair of McNeese timeouts early in the contest and led 42-19 through the first 10.

Despite cooling off from deep in the second quarter, A-State continued to apply pressure defensively with seven forced turnovers en route to leading 64-42 at the half. The Red Wolves led by as much as 34 with four minutes left in the half when Pendleton knocked down her second trey to make it a 59-25 score.

McNeese made a run in the third quarter, trimming A-State’s lead down to 16. The Red Wolves shot just 33.3 percent from the field in the period, and did not connect from deep, but still took a 78-63 advantage into the fourth quarter.

A-State pushed its lead back out to as much as 25 in the fourth quarter, with Wilkerson’s trey at the 2:31 mark sending her team past the century mark at 102-77.

Arkansas State continues its road swing on Thursday, Dec. 8, at North Alabama. Tip-off at Flowers Hall in Florence, Ala., is slated for 6 p.m. on ESPN+. The contest can also be heard live via the EAB Red Wolves Sports Network station 95.3 and 96.9 The Ticket Radio Network.

Continued here:
Red Wolves Eclipse Century Mark in Win at McNeese State. Article may or may not reflect the views of KLEK 102.5 FM or The Voice of Arkansas Minority Advocacy Council