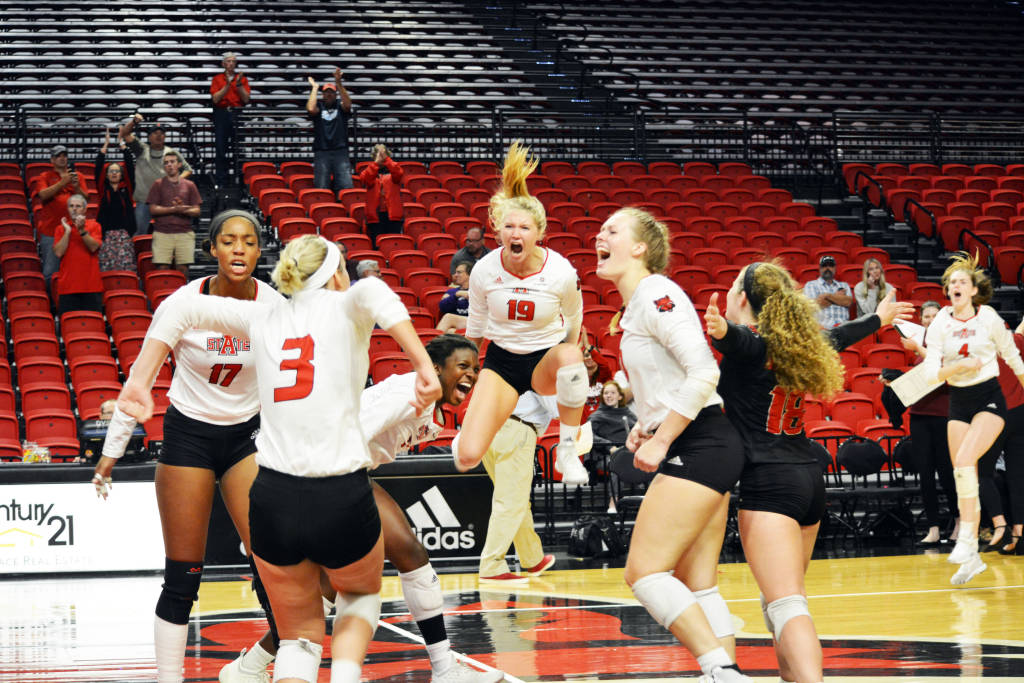 The Red Wolves (14-10, 5-7 Sun Belt Conference) won its third straight in the series over the Trojans (6-18, 4-8) en route to sweeping the season series. A-State has now claimed 10 of the last 11 meetings and improved to 3-0 on the year against foes from the state of Arkansas.

Macey Putt led all players with 11 kills in the match to go along with five digs. Hannah Cox and Peyton Uhlenhake registered double-digit digs, tallying 11 and 10, respectively. Julianna Cramer and Malgorzata Andersohn piloted the A-State offensive unit, handing out 16 and 13 assists. Andersohn also led behind the service line, serving two aces. Defensively, Kendahl Davenport led the way with five of the Red Wolves’ 11 total blocks in the victory.

During that stretch, the Scarlet and Black went on runs of 4-0 and 6-0 to propel the squad to an early 1-0 lead in the match.

Set 2 – Arkansas State 25-18
The second set began similarly to the one before it, with Little Rock taking an early 4-1 lead. The Red Wolves took an 8-7 lead on a kill by Davenport and stretched its lead out to 13-7 before the Trojans knotted up the set at 13-all with a 6-0 run.

The Trojans’ 10-2 run gave them a 17-15 lead, but the Red Wolves dug deep and held off Little Rock for the remainder of the set, winning 10 of the last 11 points to take a commanding 2-0 lead in the match.

Putt tallied five more kills in the set to lead A-State offensively, with Andersohn adding her two aces. Uhlenhake, Terrell and Brown also added a pair of kills to the Red Wolves’ cause.

Set 3 – Arkansas State 25-11
A-State kept its momentum going into the final set, taking the first four points to take a 4-0 lead that would only grow. The Red Wolves continued to control the momentum, only allowing the Trojans to score as much as three points in a row once.

After that lone 3-0 Little Rock run cut the Red Wolves’ lead to 8-6, A-State used runs of 5-0 and 8-0 to distance itself from its rival and take the clean sweep against the Trojans with a 25-11 decision in the third set.

Brown led the Red Wolves offensively in the final frame with four kills while Davenport recorded four of her five blocks.

A-State now turns its attention to a pair of tough road tests this weekend, traveling to Texas to take on UT Arlington (Friday, 6:30 p.m.) and Texas State (Saturday, 7 p.m.). Earlier this season, the Red Wolves claimed victories over both the Mavericks (3-0) and Bobcats (3-2). After returning from the Lone Star State, A-State will close out the regular season against Louisiana (Nov. 15, 5 p.m.) and ULM (Nov. 16, 7 p.m.).

Original article source: http://www.astateredwolves.com//ViewArticle.dbml?DB_OEM_ID=7200&ATCLID=211815593 | Article may or may not reflect the views of KLEK 102.5 FM or The Voice of Arkansas Minority Advocacy Council