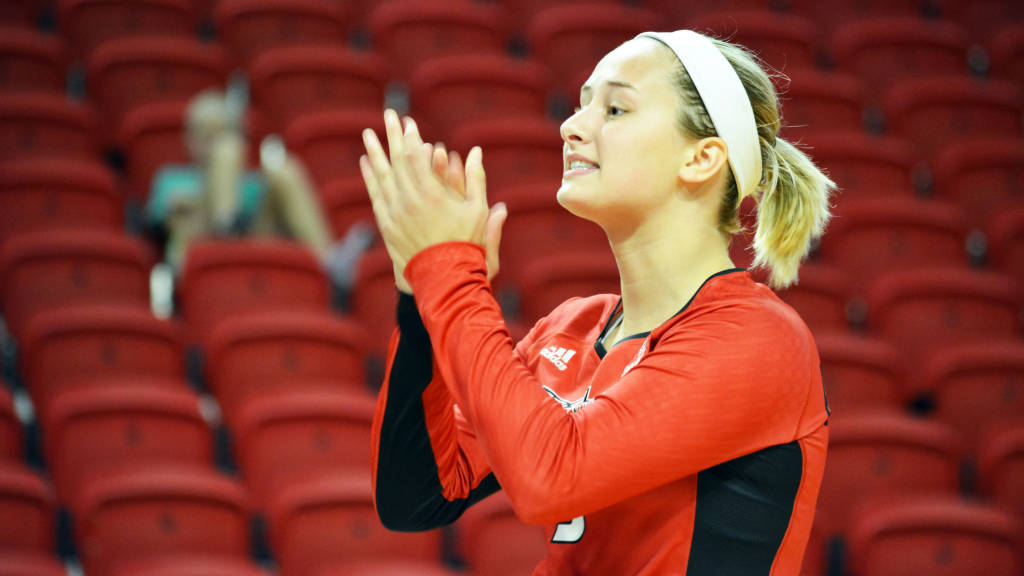 NASHVILLE, Tenn. (8/30/19) – On the opening day of the 2019 volleyball campaign, the Arkansas State volleyball team went 1-1 to open the Santiago Restrepo era, dropping a tight 3-2 season-opener to Milwaukee before sweeping North Alabama to mark Restrepo’s first win as head coach on Friday at the Bruiser Showcase.

Peyton Uhlenhake led the way for the Red Wolves (1-1), recording double-double performances in both matches. A-State also flexed its muscles defensively against UNA, holding the Lions to an attack percentage of .056. That effort marked the first time the Red Wolves held an opponent to a sub-.100 mark in that category since Oct. 13, 2018 vs. ULM.

In the season opener for both squads, Milwaukee claimed a tight 3-2 victory against the Red Wolves behind three players with double-digit kills and 10 aces. After dropping the first set, A-State battled back to take a 2-1 lead before the Panthers responded by forcing the decisive fifth set.

A-State was led by Peyton Uhlenhake, who posted the first double-double of her career (12 kills, 12 digs) and led the team in kills. Macey Putt also notched double-digit kills (11) and recorded a match-high 14.0 points. Julianna Cramer joined Uhlenhake with a double-double, collecting 10 digs to go along with a team-high 20 assists. Kendahl Davenport, in her collegiate debut, tallied a match-high 7.0 total blocks. Also on the defensive end, Ryley Gill collected a team-leading 13 digs.

Set 1 – Milwaukee 25-15
Milwaukee opened on a 4-0 run, and would not look back despite a late run by the Red Wolves pulling to within 3 early at 8-5 after a kill by Macey Putt, who tallied 5 of her 11 kills in the first set.

The Panthers would increase their lead by as much as 13 at 20-7 and would endure a late 6-0 A-State run that cut the deficit to 23-14. Milwaukee would take two of the next three points to take an early 1-0 lead in the match.

Set 2 – A-State 25-17
The Red Wolves bounced back in the second set, as Peyton Uhlenhake led the charge, recording 4 of her 12 kills (.625 attack %). Uhlenhake and Timber Terrell got the team started with two kills apiece in A-State’s 6-0 run to take a 7-2 lead, which was capped off by a Uhlenhake service ace.

A-State would continue to increase its lead, as Hannah Cox served back-to-back aces to move the Red Wolves ahead 15-8. The Panthers would surge late to cut the deficit to 18-15, but that would not be enough as A-State held on to take the second set 25-17.

Set 3 – A-State 25-18
The Red Wolves continued to improve on the offensive end, tallying 13 kills for the second straight set. A-State also benefited from a 7-2 run to open the stanza and led by as much as 8 in the set at 17-9.

At the net, Kendahl Davenport recorded 4 of her 7 total blocks on the day in the third set. Uhlenhake would go on to give the Red Wolves a 2-1 lead in the match with her fifth kill of the set.

Set 4 – Milwaukee 25-14
Milwaukee capitalized on another early 7-0 run, which the Red Wolves would not be able to overcome, despite a late 3-0 run to cut the deficit to 20-14. The Panthers would close with five more points to take a 25-14 decision to force a fifth set.

Set 5 – Milwaukee 15-10
Both teams showcased intensity in the winner-take-all fifth set, with neither team taking more than a two-point advantage until Milwaukee broke a 10-all stalemate with a 5-0 run to take the set and match.

Macey Putt led all players with 3 kills in the set, while Madison Brown and Uhlenhake also contributed to the cause.

In the second half of the twin bill, the Red Wolves stepped up offensively, hitting .241 with 42 kills on 37 assists. UNA, on the other hand, recorded only 21 kills on the day after besting Belmont in the previous match. After taking the first two sets by double-figures, the Red Wolves had to claw back from an early deficit if it wanted to take the third set. After knotting it up at 15-all, A-State sealed the deal with a 25-18 decision in the third to move to earn Restrepo’s first win as head coach at Arkansas State.

A-State was led by Uhlenhake again, who posted her second-straight double-double (14 kills, 10 digs). Malgorzata Andersohn also added a double-double performance with 18 assists and 10 digs. Timber Terrell enjoyed a strong outing, hitting .357 on 7 kills with a pair of block assists, while Macey Putt added 10 kills and a block assist.

Timber Terrell recorded a 1.000 attack percentage in the set, going 3-for-3 to pave the way. Peyton Uhlenhake led all players with 4 kills.

Much like the first set, the Red Wolves ended on an ace, this time by Hannah Cox – her second of the match and third of the day.

Set 3 – A-State 25-18
UNA turned the tables to start the third, going on an early 7-2 run, but the Red Wolves fought back to tie it up and eventually take the lead for good on a kill by Macey Putt that moved A-State ahead 16-15. After Anna Katherine Griggs tallied a kill for the Lions to cut the deficit to 17-16, the Scarlet and Black claimed eight of the last 10 points to earn the sweep.

Fittingly, the third set ended just as the previous two – on a service ace. This time, Cramer had the honors of clinching the match for the Red Wolves.

– With the win against North Alabama, the Red Wolves are now a perfect 28-0 when taking the first two sets, dating back to 2017.

The Red Wolves will close out opening weekend in their first true road test of the season, taking on host Belmont at the Bruiser Showcase. First serve is slated for 2 p.m., and the match will be streamed live on ESPN+ (subscription only) with Christian Kaposy on the call.

Arkansas State owns a 6-2 lead in the series against the Bruins, although Belmont has claimed the last two meetings.

Original article source: http://www.astateredwolves.com//ViewArticle.dbml?DB_OEM_ID=7200&ATCLID=211810499 | Article may or may not reflect the views of KLEK 102.5 FM or The Voice of Arkansas Minority Advocacy Council