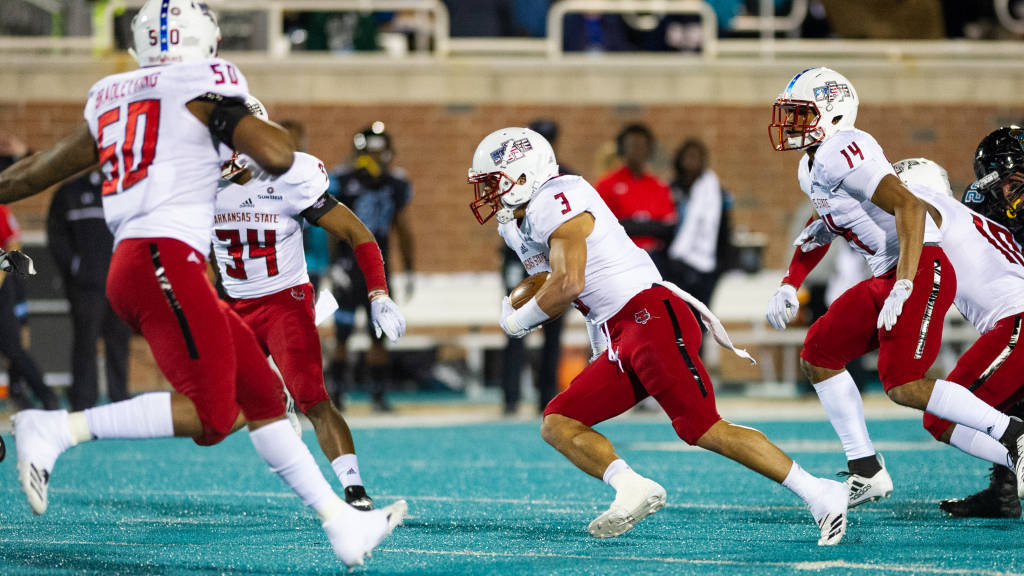 CONWAY, S.C. (11/10/18) – Justice Hansen threw for four touchdowns, while Warren Wand and Marcel Murray each added a score on the ground as Arkansas State became bowl eligible with a 44-16 victory over Coastal Carolina Saturday night at Brooks Stadium.

The Red Wolves scored touchdowns on six of their first seven possessions, including four straight in the first half. Hansen went 18-of-20 passing for 253 yards and tossed touchdowns to four different receivers.

A-State earned bowl eligibility for the eighth straight season, including all five seasons under Anderson’s direction.

“We’ve gone on the road and not played our best before so for guys to come out and handle their business, create turnovers and take care of the ball was really big for us,” Anderson said. “It is a pretty cool thing to be bowl eligible for the eighth straight year and that is a streak we wanted to keep alive, but we still have more to do and more we want to accomplish.”

Kirk Merritt led the aerial attack with 11 receptions for 180 yards, while Justin McInnis had four catches for 34 yards. In all, eight different receivers caught a pass for the Red Wolves. Merritt’s 11 catches are tied for the seventh most in school history, while his 180 yards were the ninth-most in a single game.

The Red Wolves got things rolling on their first drive of the game when Hansen led the offense on a 7-play, 80 yard march down the field that was capped with a 6-yard touchdown pass to Omar Bayless. Murray helped set up of the score with a 31-yard run to get into the red zone.

Arkansas State scored again on their next possession when Hansen led the offense on a 12-play, 95-yard drive that ended with a 6-yard pass to Reed Tyler. The Chanticleers answered with their first score of the night but missed the 2-point conversion to make the 14-6 with 10:34 left in the first half.

Coastal Carolina went for an onside kick but was unable to recover the kick and A-State took advantage of the short field and scored for the third time in the half on a 14-yard pass from Hansen to Murray to go up 20-6.

B.J. Edmonds setup A-State’s final scoring drive of the half when he intercepted his second pass of the season to set up a 7-yard run by Warren Wand to give his team a 27-6 lead at the halftime break.

Wand scored again in the third quarter on a 20-yard pass from Hansen and Murray added his second score of the night on a 2-yard run to push the lead to 41-6. Following a Coastal Carolina touchdown, Blake Grupe added a 38-yard field goal for A-State’s final points of the night.

Arkansas State returns home for senior day in a pivotal SBC West Division matchup against ULM on Saturday, Nov. 17. Kickoff from Centennial Bank Stadium is set for 2 p.m. and the game will be aired on ESPN+.

Original article source: http://www.astateredwolves.com//ViewArticle.dbml?DB_OEM_ID=7200&ATCLID=211780033 | Article may or may not reflect the views of KLEK 102.5 FM or The Voice of Arkansas Minority Advocacy Council