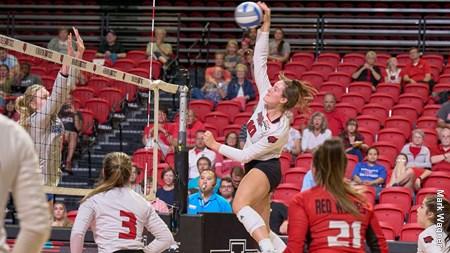 Macey Putt led the Scarlet and Black with nine kills and one of A-State’s three aces. Kyla Wiersema also served an ace to go along with seven kills on 14 attacks (.429). She and twin sister Maddie Wiersema knocked down a team-leading two blocks on the night. Lauren Musante doled out 16 assists and matched Sarah Martinez for the team lead with eight digs.

SET 1 – SOUTH ALABAMA 25, A-STATE 19
The Red Wolves held an early 3-2 lead in the opening set on a block by Musante before the Jaguars moved ahead on back-to-back kills by Hannah Maddux, who tied with Niki Capizzi with a match-high 13 kills. A kill by Putt pulled A-State to within one at 7-6, then South Alabama expanded its advantage to 15-7 with an 8-1 run. A Yazmyn Billings block sparked a Red Wolves rally, which was capped by a Bailey Helzer kill to make it 21-16 USA. Putt saved a set point to keep the frame alive, but the Jaguars got a kill by Maddux to take a 1-0 lead in the match.

SET 2 – SOUTH ALABAMA 25, A-STATE 18
After USA took the first two points of the second set, A-State responded with five of the next six points to lead 5-3, moving ahead 3-2 on a block by the Wiersema sisters. South Alabama then surged to a 13-7 lead with an 8-1 run, then pushed its lead to as much as nine. However, the Red Wolves clawed back to cut it to 22-16 on kills by Putt and Musante, along with a Putt ace. South Alabama would close out the set by winning three of the last five points to lead 2-0 in the contest.

SET 3 – SOUTH ALABAMA 25, A-STATE 19
The teams traded ties and leads early, with A-State leading 8-7 after a kill by Abby Harris. After South Alabama led 15-12 at the media timeout, the Red Wolves battled back to tie it at 16. The Jaguars then retook the lead with a 5-0 run that made it 21-16 befre A-State trimmed the deficit to 22-19 on a kill by Kyla Wiersema. USA went on to close out the match with three consecutive kills by Capizzi.

Arkansas State continues its four-match home stretch next Friday (Oct. 14), hosting Troy. First serve against the Trojans is set for 6 p.m. and the match will be broadcasted live on ESPN+.

Continued here:
Red Wolves Drop Three-Set Affair to South Alabama. Article may or may not reflect the views of KLEK 102.5 FM or The Voice of Arkansas Minority Advocacy Council