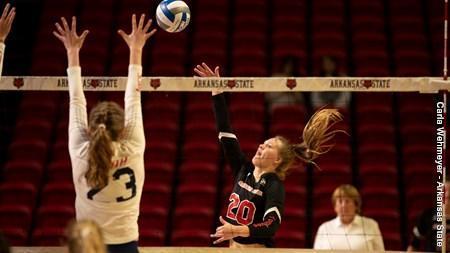 HUNTINGTON, W. Va. (11/11/22) – For the second straight night, Macey Putt and Bailey Helzer led the Arkansas State volleyball team offensively, but it was not enough to spoil senior night for Marshall, which took a 3-1 victory inside the Cam Henderson Center.

Marshall took an early 6-2 lead in the first set before A-State clawed back to tie it at 9-all on a Maddie Wiersema kill. The Thundering Herd then pushed its lead out to 17-10 following one of Essence Clerkley’s six blocks. Arkansas State worked the deficit back down to one on a Helzer kill, but Marshall clinched the set 25-22 on a kill by McElhaney.

The teams traded leads three times, along with eight ties early in the second set, until the Red Wolves went on a 4-0 run to take the lead for good on a Maddie Wiersema kill. A-State continued expanding its lead and evened the match at a set apiece with a 25-20 decision, clinched by a kill by Kyla Wiersema.

Arkansas State kept the momentum going in the third set, taking the first four points of the frame. After a kill by Elise Wilcox made it 5-2, the Thundering Herd mounted to a 14-0 run and never looked back en route to take the set 25-13 and leading 2-1 in the contest.

Needing to take the fourth set to set up a winner-take-all fifth, A-State led by as much as three before Marshall took a 15-13 advantage into the media timeout after a kill by Megan Taylor. After A-State tied it at 15-all on an ace by Clara Parker, then again at 18-all when Reeves fired an ace, the Thundering Herd pulled ahead 22-19 and forced a timeout. The Red Wolves took the next three points to tie it at 22, but Marshall would take the final three points and sealed the match with a 25-22 fourth-set victory.

Arkansas State now turns its attention to postseason play, with the first round of the Sun Belt Conference Championship beginning Wednesday in Foley, Ala. The full bracket with first-round matchups will be released Saturday.

Read more:
Red Wolves Drop Regular Season Finale at Marshall. Article may or may not reflect the views of KLEK 102.5 FM or The Voice of Arkansas Minority Advocacy Council