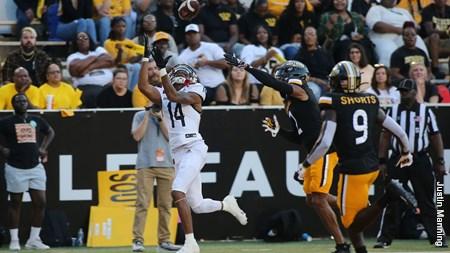 The Red Wolves (2-5, 1-3 SBC) owned a 19-7 lead entering the final 15 minutes, but a pair of rushing touchdowns by the Golden Eagles (3-3, 1-1) proved to be the difference. A-State had the ball with just over two minutes remaining, but a deep pass on fourth down by James Blackman was batted down to result in a turnover on downs.

Blackman completed 25 of 34 passes for 236 yards and two touchdowns – both to Jeff Foreman, who hauled in three catches for 50 yards. Eleven different players caught at least one pass for A-State, with Seydou Traore leading the way with five grabs for 50 yards.

Southern Miss outgained the Red Wolves 345-286, passing for 177 yards and rushing for 168 behind a game-high 96 yards from Frank Gore Jr. He and Janari Dean both rushed for touchdowns in that fourth-quarter comeback.

A-State defensive backs Kenneth Harris and Eddie Smith picked off a pair of USM quarterback Zach Wilcke passes, while Kivon Bennett led in tackles with eight (1.5 for loss), a sack and a pass breakup.

A-State put together an efficient opening drive, moving 75 yards in nine plays, capped off by a 22-yard strike from Blackman to Foreman – Blackman’s sixth completion in as many attempts on the scoring drive. Neither defense budged the rest of the quarter, with the Red Wolves holding a 7-0 lead after one.

With 8:15 remaining in the first half, Dominic Zvada tacked on a 31-yard field goal to make it 10-0 and moving him to 10-of-10 on the year. Southern Miss then answered with 23-yard touchdown pass from Zach Wilcke to Jason Brownlee to make it 10-7 with just over 5 minutes left in the half. The Golden Eagles later moved the ball into A-State territory with hopes to score before the half, but Smith intercepted a Wilcke pass with 11 seconds to go. The Red Wolves then ran out the clock to go into the locker room with a 10-7 halftime lead.

After A-State’s defense forced a punt to open the second half, Blackman piloted his offense on a 10-play scoring drive and hooked up with Foreman again, this time from 9 yards out to make it 17-7.

The Red Wolves’ next drive ended in Ryan Hanson punt, which was downed at the USM 8 by long snapper Jack Bullard. A-State’s defense kept pushing the Golden Eagles back and forced a punting situation, but the snap was dropped and fell out of bounds for a safety to make it 19-7 after three quarters.

A-State then took over on its own 33 with 2:06 to play and advanced into USM territory, but the Golden Eagles’ defense held and forced a turnover on downs to seal the win.

Read more from the original source:
Red Wolves Drop Heartbreaker at Southern Miss. Article may or may not reflect the views of KLEK 102.5 FM or The Voice of Arkansas Minority Advocacy Council