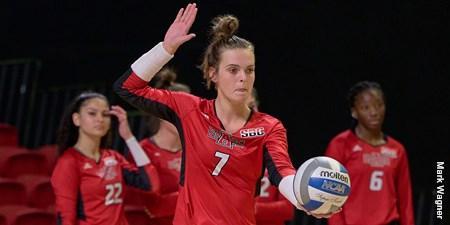 In the back-and-forth first set, A-State took a 14-11 lead on a kill by Billings, who knocked down five kills in the frame. Texas State then moved ahead 18-16 when Lauren Teske and Jillian Slaughter teamed up on a block that capped a 5-0 run. The Red Wolves responded with five straight points of their own to reclaim a 21-18 lead and allowed just two more points the rest of the set en route to taking a one-set advantage in the match.

Texas State stormed ahead to open the second set, leading 6-2 early after a kill by Caitlan Buettner. The Bobcats’ lead grew to as much as seven before A-State pulled within five after a timeout. After a service error gave the hosts set point up 24-17, an ace and attack error clinched the set to even the match at a set apiece.

Arkansas State battled with the Bobcats in the third set until a 6-0 stretch that included three of Janell Fitzgerald’s match-high 18 kills moved Texas State ahead 17-11. The Bobcats went on to lead 2-1 in the match with a 25-14 victory.

The Red Wolves did not go away, surging ahead 7-1 to start the fourth set. Texas State closed the gap down to 16-14 and then tied it up at 21-all, but a kill by Macey Putt gave A-State its first of two set-point opportunities. After a Fitzgerald kill tied it at 24, Billings blocked her next attack to make it 25-24. Maddie Wiersema then clinched the set and forced a fifth set with one of her career-high seven kills.

Texas State took seven of the first 10 points to open the fifth and made that lead 8-3 on a block by Fitzgerald and Tessa Marshall. A-State pulled within two on a kill by Putt, and then an ace by Parker made it 11-10. The Bobcats would go on to clinch the match by taking the final four points of the contest.

The Red Wolves return home for their final two home games of the season, hosting ULM Friday and Saturday inside First National Bank Arena. First serve is slated for 6 p.m. and 1 p.m., respectively, with both matches set to air live on ESPN+.

Read the original here:
Red Wolves Drop Hard-Fought Five-Set Bout at Texas State. Article may or may not reflect the views of KLEK 102.5 FM or The Voice of Arkansas Minority Advocacy Council