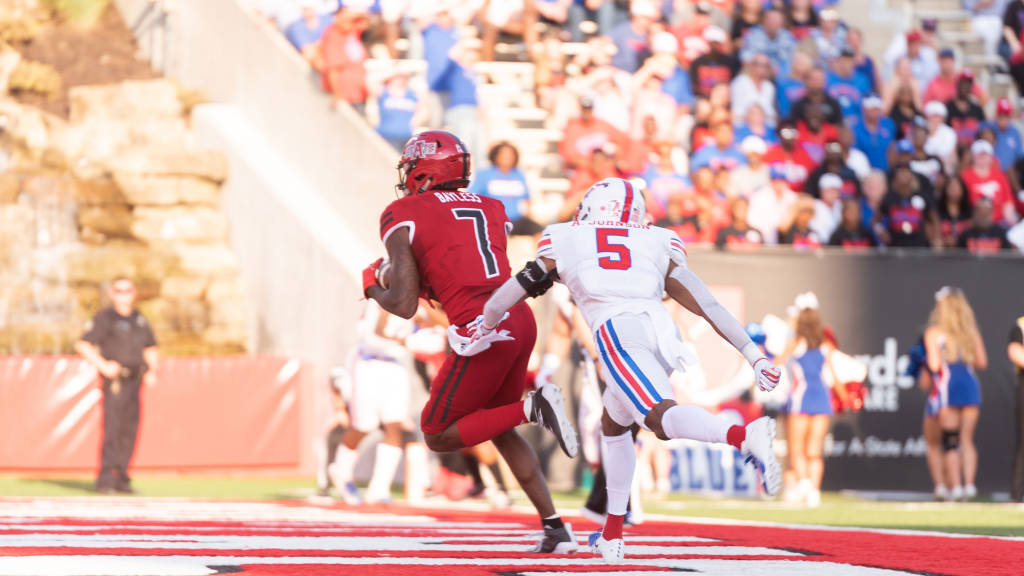 JONESBORO, Ark. (8/31/19) – A record-tying performance by Omar Bayless was not quite enough to move Arkansas State past SMU on Saturday night at Centennial Bank Stadium, as the Red Wolves (0-1) dropped a tough 37-30 decision to the Mustangs (1-0) in the season opener for both teams.

Bayless grabbed four touchdown passes from Logan Bonner, matching the school record set in 1959 by Alfred Bentley vs. Central Missouri. The clock ultimately ran out on A-State’s final drive, which was stopped at the SMU 29-yard mark.

“I really hurt for our team,” interim head coach David Duggan said. “We’ve been through a lot of adversity and I wish I could’ve done a better job getting a win for them. We talked about that adversity – that it can either define you, destroy you or strengthen you. I believe that this group was strengthened by the adversity that it overcame this past week and a half. I’m proud of their effort, I’m proud of their fight, but we just made too many first-game mistakes. You can’t do that against a good football team and think you’re going to win.”

In his first career start, Bonner completed 32 of 50 passes for 324 yards, with 265 of those yards coming in the second half. Brandon Bowling caught a career-high 12 passes to lead the Red Wolves, while Bayless hauled in 10 passes for a team-high 132 yards – both career highs.

Defensively, Jerry Jacobs led all players with a career-high 13 total tackles with William Bradley-King tallying the lone Red Wolf sack on the night.

On the opening drive, the Mustangs ventured into A-State territory, only for Darreon Jackson to pick off a Shane Buechele pass and return it 49 yards to the SMU 7-yard line. That play marked Jackson’s first career interception. The very next play, Logan Bonner fired a bullet to Omar Bayless to give A-State an early 7-0 lead.

Early in the second quarter, Bradley-King mauled through the Mustang offensive line, sacking Buechele and forcing a fumble, which was recovered in the end zone by left guard Alan Ali for a safety, putting the Red Wolves ahead 9-3.

SMU found the end zone for the first time when Xavier Jones scampered around the right side from nine yards out. Robledo added the extra point to give the Mustangs a 10-9 lead with 7:08 remaining in the first half.

After a pair of big Murray runs, the Mustangs regained possession on an interception by Terrance Newman at the Red Wolf 41-yard line. Robledo later added a 29-yard field goal to up the SMU lead to 13-9 with 3:53 left in the half.

A shanked punt gave the Mustangs prime field position at their own 45, which turned into three more points when Robledo knocked through his third kick of the night, this time from 25 yards to give SMU a touchdown lead at 16-9 with under 30 seconds left in the half. That score would hold as both teams went into the locker room at the half.

After talking things over in the locker room, A-State’s offense kicked it into high gear, starting with its opening drive.

Bonner connected with Bayless again on A-State’s first drive of the second half, scoring from eight yards to cap off a 6-play, 69-yard drive and knot things up at 16-all.

The Mustangs looked to return the favor, driving to the A-State 2-yard line. However, the Red Wolves defense held tough with a goal-line stand. Seven plays later, Bonner found Bayless for a third time, connecting on a 29-yard strike to give the Red Wolves a 23-16 lead.

SMU punched back with a 98-yard kickoff return by CJ Sanders, but the extra point was shanked, helping the Red Wolves cling to the 23-22 advantage. That score began a run of 15 unanswered points by the Mustangs.

After recovering a fumble on an A-State punt return, the Mustangs turned that into eight more points on the following drive, as Jones plunged forward for a one-yard score. Tyler Page completed a pass to Kylen Granson for the two-point conversion that put SMU ahead 30-23 with under a minute left in the third.

Cody Grace pinned the Mustangs back to their own 11, but Buechele led his offense on an 11-play drive that took nearly five minutes off the clock. Jones found the goal line for the third time, scoring from two yards to give SMU a two-score lead at 37-23 with 9:11 remaining. Jones rushed 18 times for 56 yards.

With under 6 minutes remaining, the Red Wolves cut the deficit in half when Bonner found Bayless for the fourth time for a 34-yard strike, matching the program’s single-game record.

SMU halted the Red Wolves’ last chance at tying up the contest, as Delontae Scott sacked Bonner at the SMU 32.

Reggie Roberson, Jr., led the Mustangs with 11 catches for a game-high 180 yards, while Buechele was 30-of-49 passing for 360 yards and one interception. Ke’Mon Freeman led SMU in rushing with 86 yards on 22 attempts.

For the Red Wolves, Cody Grace punted six times for a 41.5-yard average and a long of 55, landing three inside the 20, giving him 37 for his illustrious career.

The Red Wolves next head out west to Las Vegas, where they will face UNLV with hopes of building on last season’s 27-20 victory in Jonesboro. Kickoff is schedule for 9 p.m. (CT) from Sam Boyd Stadium with the game available on WatchStadium via Facebook. A-State returns to Jonesboro after another road contest at No. 3 Georgia (11 a.m. CT, Sept. 14), when it will host Southern Illinois at 2 p.m. at Centennial Bank Stadium.

Original article source: http://www.astateredwolves.com//ViewArticle.dbml?DB_OEM_ID=7200&ATCLID=211810595 | Article may or may not reflect the views of KLEK 102.5 FM or The Voice of Arkansas Minority Advocacy Council