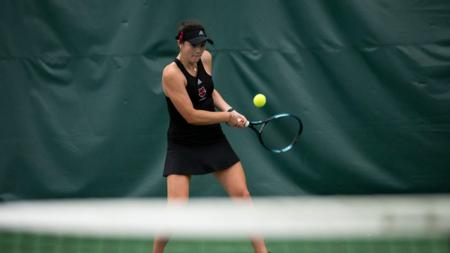 In the first match of the day, Arkansas swept the doubles point on all three courts. Sarah Millard and Rebecca Brody came up short 6-2 on court one while Sofia Vdovychenko and Anna Borovinsakaya lost 6-0 on court two. Abigail Thurmer and Yasmine Humbert also lost by a tally of 6-2 playing their matchup on court three.

Millard, playing at No. 1 singles, came up just short against Kelly Keller 6-4, 6-4 while Brody fell 6-1, 6-1 to Indianna Spink at No. 2 singles. Borovinsakaya was swept 6-0, 6-0 by Lenka Stara on court three and Morgran Cross dealt Thurmer a 6-1, 6-0 setback on court four. The Razorbacks completed the 7-0 victory in the opener with Kacie Harvey defeating Vdovychenko 6-0, 6-3 and Yuhan Liu topping Yasmine Humbert 6-1, 6-1.

The second match of the day began with the Razorbacks once again winning the doubles point for an early advantage. Thurmer and Humbert lost 6-1 on court three and Arkansas clinched the doubles point with a 6-2 victory over Brody and Millard on court one. Vdovychenko and Borovinskaya trailed 4-3 on court two at the time the point was clinched.

Read the original here:
Red Wolves Drop Doubleheader Versus Arkansas. Article may or may not reflect the views of KLEK 102.5 FM or The Voice of Arkansas Minority Advocacy Council