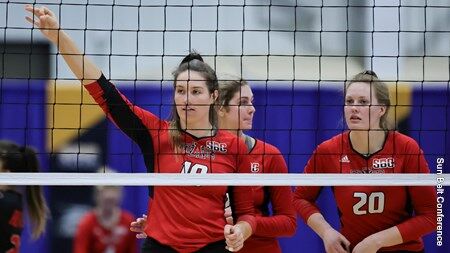 FOLEY, Ala. (11/18/22) – Vying for its first trip to the Sun Belt Conference semifinals since 2018, the Arkansas State volleyball team’s tremendous tournament run ended Friday, dropping a hard-fought 3-2 battle to Troy in the quarterfinal round.

The Red Wolves (9-22), seeded sixth in the West but saving its best performances for when it mattered most, hit .355 in the fourth set and held the Trojans (18-11) to a sub-.200 mark in the frame en route to forcing a fifth set. A-State held match point up 14-11, but the West Division’s second-seeded squad took six of the final seven points in the match to win 17-15 in the final set.

Macey Putt went out as one of the match’s top players with 19 kills and 15 digs – her second double-double in the tournament – while hitting .185. Freshman Bailey Helzer capped off her strong first tourney with 14 kills and 10 digs while hitting .195. Kyla Wiersema caught fire late and led the squad with a .579 clip with a dozen kills and just one error on 19 attacks, while accounting for seven of A-State’s 11 blocks. Seven of her 12 kills came in the fifth set.

Sophomore libero Sarah Martinez led all players with 22 digs and served three of A-State’s six aces. Helzer and fellow frosh Abby Harris also served an ace, while Kassidy Reeves added one to go along with 32 assists.

Arkansas State survived an early push by the Trojans, who led 8-4 to start the first set, but a 15-4 run by the Red Wolves turned the tide when a block by Putt made it 19-12 and forced a Troy timeout. The Trojans later rallied to cut it to 23-19 on one of Halston Hillier’s 12 kills, but a service error gave A-State set point up 24-19. Amiah Butler then saved a set point on one of her 15 kills, but Kassidy Reeves dumped it over the net to clinch the Red Wolves’ 25-20 first-set victory.

The Trojans once again surged ahead early in the second set, leading by as much as eight before A-State pulled to within five on a block by Wiersema and Elise Wilcox to make it 16-11. Troy pushed its lead back out to 23-16 on a Hillier kill, but a service error and kill by Helzer cut it to 23-18. Hillier knocked down a kill to get it to set point, then the Trojans evened up the match at a set apiece on an ace by Jaci Mesa – one of three by the Troy libero who also accounted for 18 digs.

A-State kept it close in the early stages of the third set, but a 10-1 run gave the Trojans a 15-6 lead that would be difficult to overcome. Troy’s lead expanded to as much as 10, with an ace by Sara Bates ending the set at 25-14 to give the Trojans a 2-1 lead.

The Red Wolves seized momentum in the fourth set with a 5-0 run that included back-to-back aces by Martinez to lead 10-7. A-State never trailed after that point, pushing its lead out to 21-13 on a kill by Yazmyn Billings, who also registered three blocks. After the Trojans cut it to six, the Scarlet and Black forced another fifth set to decide who advances to the next round.

Troy took the first three points of the fifth set, then moved its lead out to 6-2 on a block by Julia Brooks and Amara Anderson to force a timeout. Brooks knocked down three blocks with 13 kills, while the setter Anderson handed out 53 assists.

That timeout fortunately came at the right time, as Arkansas State clawed back to tie it at 8-all, then kills by Helzer and Wiersema later tied it at 10 and prompted the Trojans to take a timeout. A-State took four of the next five points out of the break to lead 14-11 with three match-point opportunities, but Troy answered with a 3-0 run to force extra points. Wiersema’s final kill gave the Red Wolves another match point with a 15-14 lead, but Butler tied it with a kill, followed by a block by Anderson and Brooks to make it 16-15 Troy. Hester ended things on the next rally, clinching the match with a kill.

Continued here:
Red Wolves’ Dramatic Run Ends in Five-Set Quarterfinal Battle. Article may or may not reflect the views of KLEK 102.5 FM or The Voice of Arkansas Minority Advocacy Council