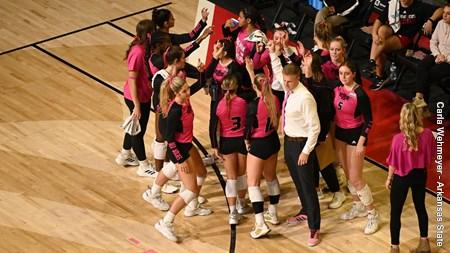 Macey Putt led the Red Wolves with 13 kills and tied Abby Harris for the team lead in blocks with three. Kassidy Reeves hand out 10 assists, while Bailey Helzer tallied a team-high 10 digs to go along with two aces.

SET 1 – TROY 25, A-STATE 19
A-State took the first three points to start the match and led by as much as three until an 8-0 Troy run made it 16-11 Trojans. The visitors expanded their lead out to six until the Red Wolves cut the deficit in half with a 3-0 stretch. Troy then pushed its lead out to 23-16 after back-to-back kills by Tori Hester, who accounted for a match-high 18 kills. Kills by Elise Wilcox and Lauren Musante closed to gap to five before the Trojans held set point up 24-18. A service error kept the set going before Troy clinched the set on a kill by Halston Hillier.

SET 2 – TROY 25, A-STATE 19
Troy took an early 4-0 lead in the second set before Arkansas State came back to cut it in half on kills by Helzer and Putt. After Troy’s lead expanded to six, A-State relied on aces by Helzer and Sarah Martinez to make it 11-8. The Trojans pushed the margin back out to seven, but the Red Wolves once again cut it down to three before Troy took the second set with a 3-0 run to end the frame.

SET 3 – TROY 25, A-STATE 21
The Trojans again opened with four straight points in the third, but A-State managed to cut the deficit to two on a kill by Putt. Troy later moved its lead to 19-13 on a kill by Hester before the Red Wolves clawed back to within three on a trio of saved match points. After a Musante ace, Hester clinched the match for the Trojans with a kill.

Arkansas State next faces a four-match road swing, beginning with a pair of matches at Southern Miss Friday and Saturday, Oct. 21-22, in Hattiesburg, Miss. First serve inside the USM Wellness Center is slated for 6 p.m. Friday and 2 p.m. Saturday.

Read more:
Red Wolves Downed in Three by Troy. Article may or may not reflect the views of KLEK 102.5 FM or The Voice of Arkansas Minority Advocacy Council