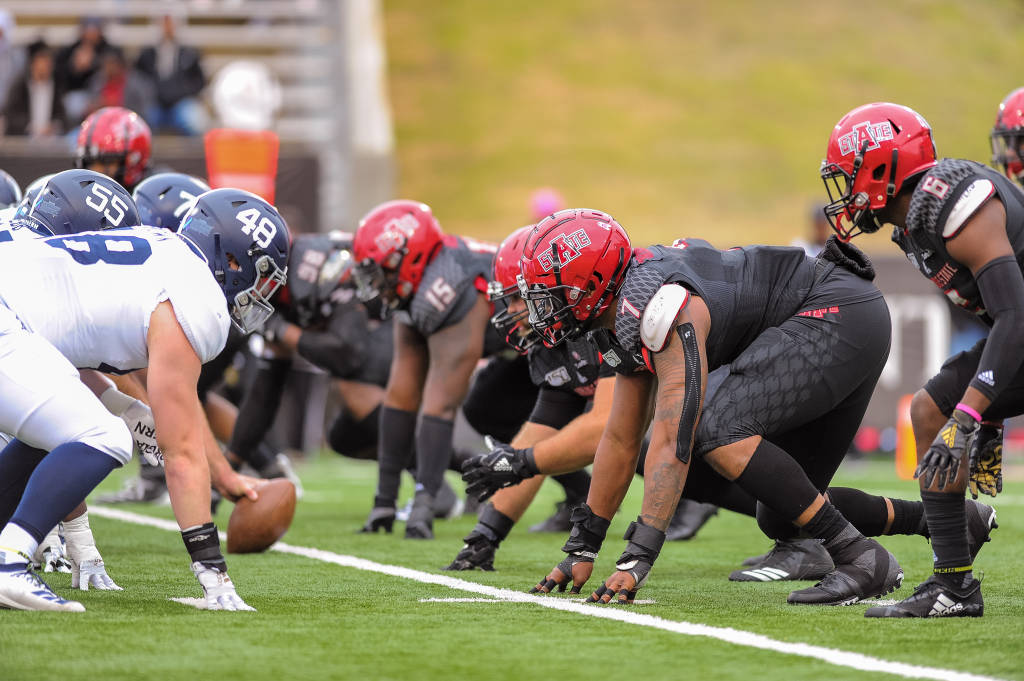 JONESBORO, Ark. (11/23/19) – Layne Hatcher threw for four touchdowns in the first half to stake Arkansas State to a 35-10 lead and the Red Wolves defense held off a Georgia Southern rally in a 38-33 senior day victory Saturday at Centennial Bank Stadium.

“The victory formation is the best formation in football when you get a chance to get to it, but I wasn’t sure if we’d ever get there,” said A-State head coach Blake Anderson. “Georgia Southern has a good ball club and I knew it would take 60 minutes. When (Georgia Southern QB) Shai Werts starts improvising, that’s when you have to start holding your breath. He’s a great athlete and we knew it. We did a good job against their base offense all night, but when the play broke down, he improvised and showed his athleticism. We made adjustments and made tackles that got us out of the game.”

B.J. Edmonds forced a fumble and the Red Wolves recovered at the Eagles 32-yard line. Hatcher connected with Bayless for a quick 32-yard pass and catch giving Bayless 15 touchdown receptions on the season. Georgia Southern scored a touchdown to make it 21-10, but Merritt returned the ensuing kickoff 94 yards for a touchdown, the first kickoff returned for a touchdown since Blaise Taylor against Louisiana Tech on Dec. 19, 2015.

The quick scores continued as the Red Wolves took over after a Georgia Southern punt and scored on the first play of the drive. Hatcher found Merritt for a 27-yard touchdown reception, the fourth-straight score on an A-State possession. For Hatcher, it was his fourth touchdown pass of the day to three different receivers and the Red Wolves led 35-10 with 6:07 to play before halftime.

Georgia Southern was stuffed on a fourth down inside the five-yard line, but forced a safety on A-State’s ensuing possession and scored after the punt to set the halftime score of 35-19. After a 19-yard field goal by Blake Grupe, the Eagles continued to chip away at the Red Wolves lead completing an 8-yard touchdown pass and two-point conversion to make the score 38-27 with 6:51 remaining in the third quarter.

The Eagles trimmed the deficit to 38-33 with 4:50 to play. The Eagles drive was aided by three A-State penalties on third and long plays that resulted in automatic first downs. The Eagles drive covered 73 yards on eight plays, but penalty yardage accounted for 45 of those 73 yards. Following a missed field goal by A-State, Georgia Southern had a chance to take the lead with 1:29 to play. The Eagles drove inside A-State territory with under 50 seconds to play, but came up inches short on a fourth down as the A-State defense secured the victory.

The Red Wolves close the regular season on Friday, November 29, at South Alabama. Kickoff is set for 4:00 p.m. in Mobile, Ala., on ESPN+.

Original article source: http://www.astateredwolves.com//ViewArticle.dbml?DB_OEM_ID=7200&ATCLID=211816449 | Article may or may not reflect the views of KLEK 102.5 FM or The Voice of Arkansas Minority Advocacy Council