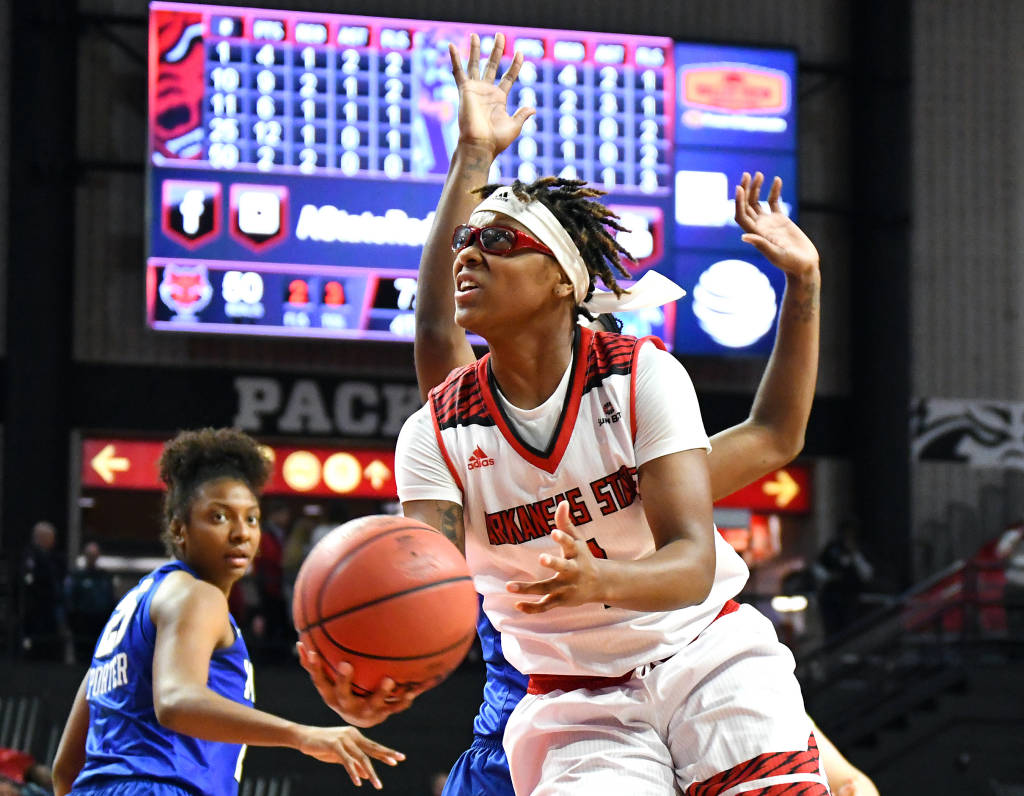 Collecting their second all-time victory over Memphis and their first since 1988, the Red Wolves evened their record at 1-1 on the young season. A-State improved its all-time record in home openers to 40-6 with 17 of those victories coming under the direction of head coach Brian Boyer. The Tigers saw their record move to 1-1 with the loss.

Joining Martin in double figures for the Red Wolves were sophomore forward Kayla Williams and freshman guard Jireh Washington with 15 points each, as well as Akasha Westbrook with 11 that gives the senior guard 28 career double-digit scoring games.

A-State, which trailed 52-48 after the game’s first three periods, closed out the final 10 minutes with a 53.8 field goal percentage to finish the night with an overall shooting mark of .471. The Tigers shot .441 from the field, and while they out-rebounded the Red Wolves 36-32, committed four more turnovers and saw their bench outscored 25-13 by A-State.

Entering the fourth period down by four points, A-State saw Memphis build its advantage to 60-52 with 7:46 to play. However, the Red Wolves responded with a 9-0 run over the next three minutes to take their first lead since late in the opening period.

Williams capped the run with a three-pointer before Memphis briefly regained the lead on a layup by guard Jamirah Shutes. The Red Wolves then went right back to work, starting another run where they outscored the Tigers 10-2 to go ahead 71-64 with 1:48 remaining.

Memphis couldn’t get closer than five points the rest of the period, which saw A-State outscore it 29-14. The Red Wolves made 7-of-13 shots and took care of business at the stripe during the period, hitting 14-of-17 free throws.

“Certainly in the first quarter, really defensively, they just attacked us and did what they wanted offensively,” said Boyer. “But we got better defensively as the game went along and did a better job in the second half taking care of the ball and not turning it over as much. I think depth probably had a lot to do with this win. I thought we got better as the game went along and that they got fatigued and obviously got into some foul trouble. I think that was a big part of us being able to extend the lead in the fourth quarter.”

Memphis jumped out to an 11-2 lead five minutes into the contest, but A-State went on a 13-3 run to take their only lead of the first half at 15-14 with 2:55 remaining in the first period, which ended with the Tigers holding a 25-20 advantage.

The Red Wolves outscored the Tigers 13-12 in the second period and both squads put up 15 points in the third. Memphis held its largest lead of the game at nine points twice during the second period, but A-State continued to stay within striking distance before eventually taking the lead back in the fourth period.

Arkansas State junior guard Starr Taylor handed out a team-high five assists to go along with seven points, and four Red Wolves recorded a team-best four rebounds. Memphis was led by Shutes and Alana Davis with 18 and 16 points, respectively, while Kiana Coomber recorded a game-high 10 rebounds.

The Red Wolves return to action Saturday, Nov. 17, with a 1:00 p.m. game at UT Martin. For the latest on A-State women’s basketball, log on to the team’s Facebook page at Facebook.com/RedWolvesWBB, or follow them on Twitter @AStateWB and on Instagram at “AStateWBB.”

Original article source: http://www.astateredwolves.com//ViewArticle.dbml?DB_OEM_ID=7200&ATCLID=211780308 | Article may or may not reflect the views of KLEK 102.5 FM or The Voice of Arkansas Minority Advocacy Council