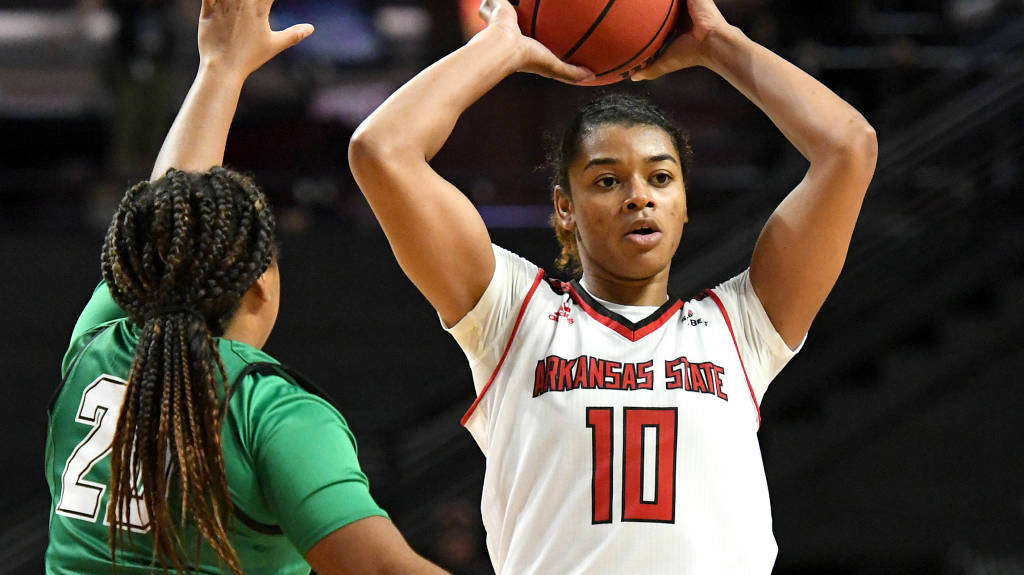 “UT Martin is a very good team and just another of the good teams we’ve played to this point,” said A-State head coach Brian Boyer. “We may have the best one we’ve played Tuesday against Louisiana Tech. I think our players are excited about that. Let’s keep playing against good competition and see how we handle it.”

Martin had career highs of 27 points and 12 rebounds for her first career double-double while Westbrook had 16 points and a career best 14 rebounds. Morgan Wallace (13), Payton Tennison (11) and Jireh Washington (10) also reached double figures for A-State (1-2). Aundrea Adams and Chelsey Perry each had 21 points to lead the Skyhawks (3-1).

UT Martin led 76-65 with 7:59 to play, but A-State cut away at the lead to force the extra time. Westbrook and Martin combined for 10 of 14 A-State points in a 14-5 run that made it an 81-79 score with 4:52 to play. The Skyhawks scored on back-to-back possessions to rebuild a six-point advantage, but A-State refused to go away.

After Martin split a pair of free throws, A-State got a stop and Washington pulled up for a jumper to see the Red Wolves trail 85-82 with 2:57 to play. The Skyhawks split free throws to make it 86-82 at 2:15, but neither team was able to score the next minute. Washington ended the drought was a fast break layup to set up A-State with a chance to win or send it to overtime.

Payton Tennison drew a foul with 20 seconds remaining and drained two clutch free throws to knot the score at 86. A pullup jumper with one second remaining did not go for the Skyhawks sending the game to overtime. UT Martin opened the extra frame with a 3-pointer and never looked back as the Skyhawks led the entire period.

A-State continues its tough non-conference slate with a matchup against Louisiana Tech on Tuesday inside First National Bank Arena at 7:00 p.m.

Original article source: http://www.astateredwolves.com//ViewArticle.dbml?DB_OEM_ID=7200&ATCLID=211781070 | Article may or may not reflect the views of KLEK 102.5 FM or The Voice of Arkansas Minority Advocacy Council