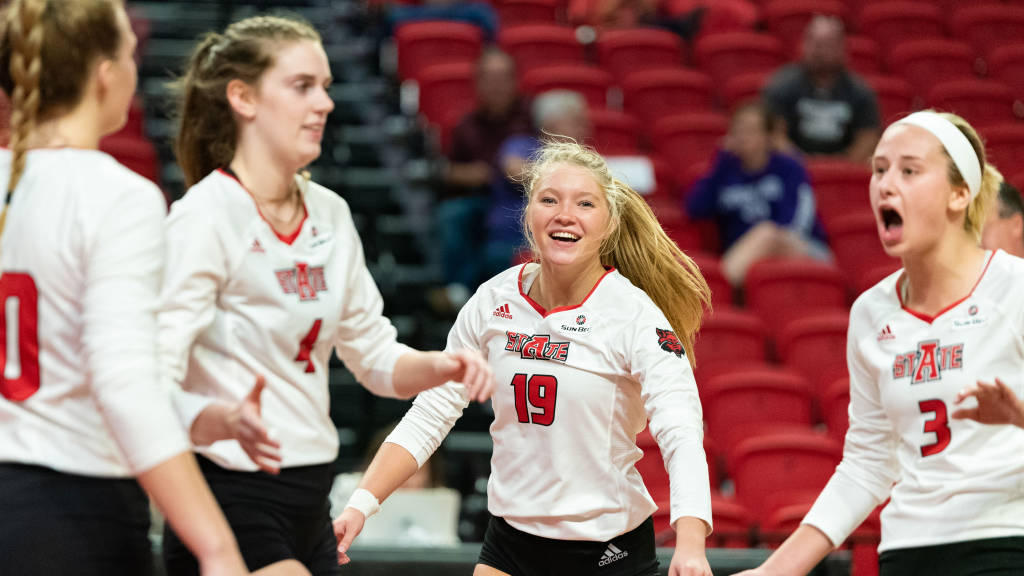 Madison Brown led the way with a season-best and match-high 10 kills and five blocks as the Red Wolves (6-3) hit .316 on the day, while holding the Golden Lions (0-10) to a negative hitting percentage (-.022) to cruise to the victory.

Malgorzata Andersohn tallied yet another double-double, dishing out 16 assists while gathering a team-high 12 digs in the win. The freshman recorded a pair of double-doubles in three matches this weekend.

A-State was represented by Timber Terrell and Macey Putt on the all-tournament team. The honor marked Putt’s second all-tournament honor of the season, and Terrell’s first. Terrell notched career-best kill numbers over the weekend, totaling 36 kills and 10 blocks while Putt notched 39 kills to 32 digs, recording a pair of double-doubles in the process.

Set 1 – A-State, 25-15
Arkansas State gained early momentum after UAPB took a 2-1 lead in the first set, taking control on a quick 3-0 run to go ahead 4-2. The Red Wolves would extend that lead by as much as 10, taking advantage of several Golden Lion errors down the stretch.

Five of Brown’s 10 kills occurred in the first set, leading the squad. Macey Putt and Peyton Uhlenhake each recorded three kills to aid in the A-State attack. Andersohn led in assists with seven, while Cramer provided six. Kendahl Davenport and Josie Stanford each recorded solo blocks while Stanford and Brown teamed up for a block early in the set to increase A-State’s lead to 6-3.

Set 2 – A-State 25-15
A-State took an early lead in the second set and never looked back, mounting to as much as an 11-point lead. Up 22-11, the Red Wolves staved off a brief comeback by UAPB on a 3-0 run by taking three of the final four points to cruise past the Golden Lions to a 25-15 decision in the set, capped off by a kill by freshman Karolina Kugiel. With A-State ultimately claiming the match, the Red Wolves improved to 31-0 since 2017 when going up 2-0 in the match.

Set 3 – A-State, 25-10
Nearly all momentum shifted to the home bench in the third set, despite UAPB taking the first point of the set. After the Golden Lions tied up the set at 4-all on a service error, the Red Wolves surged to a 10-2 run that put the set and match out of reach. After that stretch, A-State only surrendered four more points to trounce UAPB 25-10 in the third set.

In the set, the Red Wolves saw aces by Cox, Stanford and Uhlenhake, while recording seven total blocks as a team to squash any rallies by the Golden Lions.

The Red Wolves head east to the Commonwealth of Virginia for their final pre-conference tournament in Blacksburg, Virginia, at the Hokie Invitational. There, A-State will open up with Charlotte (Sept. 20, 9 a.m. CT), followed by a nightcap against host Virginia Tech (6:30 p.m.). On Saturday, the Red Wolves will close non-conference play with a Noon CT match against Chattanooga.

Original article source: http://www.astateredwolves.com//ViewArticle.dbml?DB_OEM_ID=7200&ATCLID=211811708 | Article may or may not reflect the views of KLEK 102.5 FM or The Voice of Arkansas Minority Advocacy Council