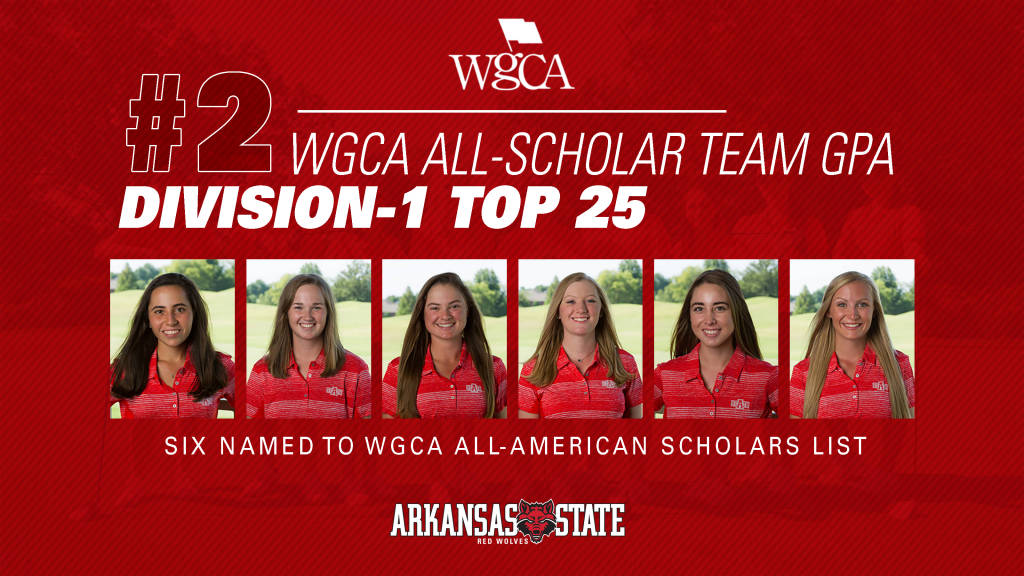 JONESBORO, Ark. (7/11/18) – The Arkansas State women’s golf team was named a recipient of the Women’s Golf Coaches Association All-Scholar Team GPA award after the Red Wolves finished with the second best GPA in Division I as the WGCA released its award winners Wednesday afternoon.

A-State finished the year with a 3.866 team GPA to rank second behind Nebraska-Omaha’s 3.949. Rutgers was behind the Red Wolves in third with a 3.812 mark, while East Carolina (3.806) and Arizona State (3.790) rounded out the top five. This is the first time in school history Arkansas State has earned an All-Scholar Team GPA Award, which began in the 2004-05 season.

“This is a great honor to be recognized as one of the top two Division I WGCA All-Scholar teams in the country,” A-State head women’s golf coach M.J. Desbiens Shaw said. “I think it says a lot about the hard work our players put into both academics and competition, and it really shows just how committed they are to making our program successful both on and off the golf course.”

The All-Scholar Team GPA award for the squad doesn’t come as a surprise as Arkansas State recently placed six on the WGCA All-American Scholars list, which included Maria Jose Atristain Vega, Sarah Childers, Beth Ann Compton, Grayson Gladden, Aracelly Jimenez Rios and Emma Miller. The Red Wolves had the most players of any Sun Belt Conference school on the list.

The Women’s Golf Coaches Association, founded in 1983, is a non-profit organization representing women’s collegiate golf coaches. The WGCA was formed to encourage the playing of college golf for women in correlation with a general objective of education and in accordance with the highest tradition of intercollegiate competition. Today, the WGCA represents over 600 coaches throughout the U.S. and is dedicated to educating, promoting and recognizing both its members and the student-athletes they represent.

Original article source: http://www.astateredwolves.com//ViewArticle.dbml?DB_OEM_ID=7200&ATCLID=211734744 | Article may or may not reflect the views of KLEK 102.5 FM or The Voice of Arkansas Minority Advocacy Council