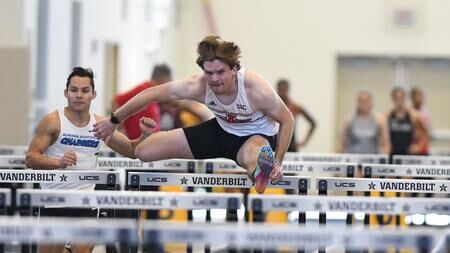 NASHVILLE, Tenn. (1/21/23) – Multiple Arkansas State track and field athletes either entered or moved up the program’s indoor top 10 on Saturday at the Vanderbilt Invitational.

Colby Eddowes recorded another strong performance, this time in the 60-meter hurdles, winning with a time of 8.01 that ties him for sixth in school history, matching Solomon Williams (2010). He qualified for the final by running a collegiate-best 8.08 in the prelims.

Jonae Cook eclipsed her previous collegiate-best 60-meters time twice en route to a third-place finish. She clocked a top qualifying time of 7.50 in the prelims before running a time of 7.48 in the final. On the men’s side, freshman Myles Thomas also placed third and moved into a tie for third all-time with a mark of 6.77 in the final after registering a then-personal-best time of 6.80 in the prelims. He tied Justin Whitfield (2014) for third in A-State indoor history.

In the women’s 3000 meters, Sophie Leathers crossed in 9:46.21 to place seventh, but moved up to third in school history in the event, while Elizabeth Martin finished in 9:53.16 – a time that is sixth in program history. Rylan Brown clocked a time of 8:25.29 in the men’s 3000 meters, ranking sixth in school history in the event.

Hannes Fahl finished the men’s mile in 4:10.04, a time that is fourth best in the A-State indoor record books.

The Red Wolves return to action in a pair of meets next week. Some Red Wolves will travel to Lubbock, Texas, for the Texas Tech Open and Multis, beginning Thursday, Jan. 26 and ending Saturday, Jan. 28, while others will travel to the Pacific Northwest for the UW Invitational, held Friday and Saturday in Seattle.

Read more here:
Red Wolves Capture Multiple Podium Finishes to Close Vanderbilt Invitational. Article may or may not reflect the views of KLEK 102.5 FM or The Voice of Arkansas Minority Advocacy Council