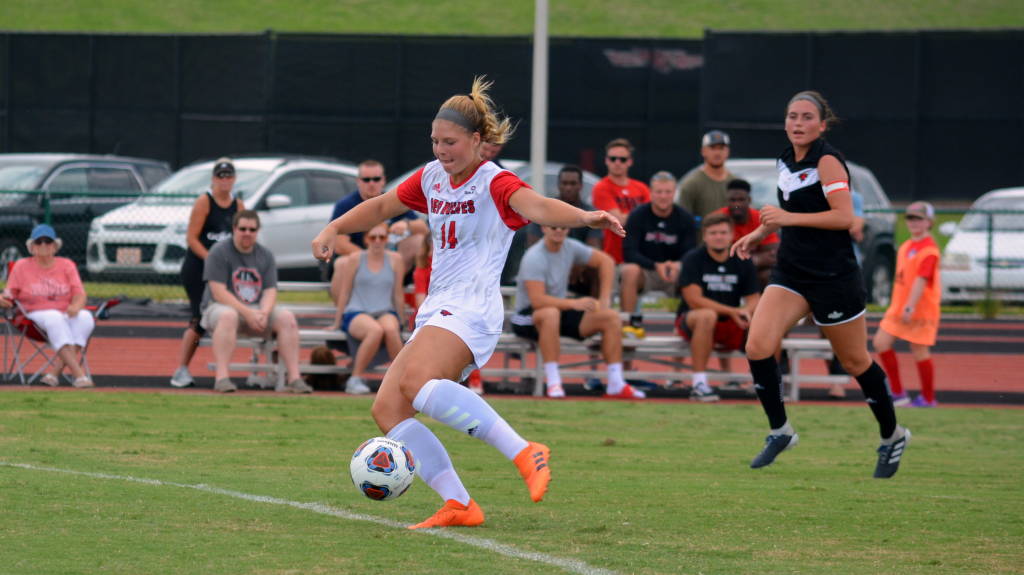 JONESBORO, Ark. (8/19/18) – The Arkansas State women’s soccer team battled Omaha to a 1-1 draw Sunday afternoon after rallying from an early deficit at the A-State Soccer Park.

Statistically, the Red Wolves (1-0-1) held the advantage over the Mavericks, finishing with an 18-11 edge in shots, including a 9-4 mark in shots on goals and a 10-2 mark in corner kicks.

After conceding a goal in the fourth minute, A-State dug their heels in and withstood a barrage of shots before finally taking and converting on their first shot of the match in the 21st minute.

Julianna Coates sent in a free kick ball that was headed on by Hailey Furio and Victoria MacIntosh before finding the foot of Maggie Ertl in a good position in front of the net. Ertl did not hesitate and put the goal away on her first touch to tie the match at one goal each.

The Red Wolves continued to put pressure on the Mavericks’ back line for the remainder of the first half and saw one scoring chance wiped out by an offside call in the 30th minute. The run occurred off another free kick following a yellow card on Omaha that found the speedy Sarah Sodoma running free in space but she was deemed to have been offside when she started her run.

Sodoma had another opportunity in the 54th minute when she took a pass in the middle of the field and outraced her defenders toward the goal, but her shot was deflected away by Omaha goalkeeper Ina Gudjonsdottir who ran off her line to meet Sodoma at the top of the box and pushed the ball out for a corner kick.

A-State’s best chances came in the 78th minute when Ertl sent in a corner kick that was collected by Taylor Schneider, but the Mavericks cleared the ball off the line just before crossing to preserve the tie. Thirty seconds later, Ertl sent in another corner that found the head of Furio who put her attempt on her mark but it went right into the hands of Gudjonsdottir.

In the overtime periods, Arkansas State continued to pressure and continued to get good looks on target but were unable to find a way to get a ball the Omaha goalkeeper.

Megan McClure, in her first start of the season, made three saves on the day, including one with 20 minutes to go in regulation and another in overtime to help preserve the tie.

The Red Wolves will take to the road for the first time in 2018 with a trip to Saint Louis University to take on the Billikens on Friday, Aug. 24. Kickoff is set for 7 p.m.

Original article source: http://www.astateredwolves.com//ViewArticle.dbml?DB_OEM_ID=7200&ATCLID=211768617 | Article may or may not reflect the views of KLEK 102.5 FM or The Voice of Arkansas Minority Advocacy Council