SAN MARCOS, Texas (11/21/19) – Down two sets facing elimination in the first round of the 2019 Sun Belt Conference Tournament, the Arkansas State volleyball team needed to play its best if it wanted to continue on to Friday.

That’s exactly what happened, as the eighth-seeded Red Wolves (17-12) reduced its errors in the final three sets in route to an exciting 3-2 triumph (20-25, 21-25, 25-12, 25-20, 15-7) over fifth-seeded Louisiana (14-17) on Thursday night at Strahan Arena. The win over the Ragin’ Cajuns marked the seventh year in a row A-State has won at least one match in the conference tournament and means the Red Wolves will take on fourth-seeded Troy in the conference quarterfinals on Friday at 5 p.m. CT.

“I’m just really proud of them,” head coach Santiago Restrepo said. “They fought all the way until the end and never gave up. We talked to our team about minimizing errors. To only have 18 errors in the match is great, but we only had one error in the third set, four errors in the fourth set and only one in the fifth set. That’s what it took. (Louisiana) is an excellent team and very well-coached. We just came out and performed in the last three sets like we should have the whole time.”

Paulina Sobolewska led a vaunted Arkansas State attack that hit .297 in the match (.421 in the fifth set) with a career-high 18 kills and 11 digs to headline four players in double-digit kills on Thursday. Madison Brown matched her career-best with 16 kills on the night with a blistering .344 attack percentage. Macey Putt and Timber Terrell once again factored in double-figure kills, notching 13 and 12, respectively.

Arkansas State saw a tremendous performance out of both of its setters, with Malgorzata Andersohn handing out a career-high 32 assists to go along with 12 digs – marking her 12th double-double of the year. Julianna Cramer also tallied a double-double, dishing 24 assists and collecting 11 digs. Hannah Cox was as strong defensively as she had been all season, matching her career high with 25 digs.

Sobolewska also proved to be a force on the front row, tallying four total blocks. Josie Stanford led A-State with five. As a team, the Red Wolves knocked down seven total blocks while holding the Cajuns to a .218 percentage and forcing 20 attack errors, several of them key late in the match.

The Red Wolves also fired nine service aces – three each by Putt and Stanford – that proved to be pivotal throughout the match.

The first two sets were closely contested, featuring a combined 16 ties and six lead changes. In the first set alone, there were 14 ties and five lead changes.

Neither team established full momentum in the first set, until the Cajuns broke a 17-all score on a kill by Celeste Darling. From there, Louisiana claimed seven of the next 10 points to hold onto a tight first-set decision at 25-20.

In the second set, the Red Wolves came out with a quick 4-0 lead that grew to as much as 10-4. However, the Cajuns inched closer until knotting up the set at 16 on a 3-0 run. After Stanford’s kill halted the run, Louisiana embarked on another 3-0 run to lead 20-17 and would hold off the Red Wolves again, this time taking a 25-21 second set to own a commanding 2-0 lead in the match.

The Red Wolves came out of the extended set break with tremendous energy that proved to make a difference in not only the set, but ultimately in the match. A-State led from the start, taking an early 4-2 lead before the Ragin’ Cajuns tied up the set at 5-all. Then, the Red Wolves brought the heat, going on a remarkable 12-1 to stretch their lead out to 17-6.

Louisiana’s last push came on a 3-0 run to cut the deficit down to single digits at 17-9, but another 5-0 run stretched the Red Wolves’ lead back out to 22-9. The Ragin’ Cajuns could not seize any momentum for the remainder of the set, with A-State claiming a dominant 25-12 third set to extend the match.

The fourth set began with Louisiana taking the first point on a kill by Avery Breaux. A-State then rattled off three of the next four points to take a 3-2 lead on a pair of kills by Sobolewska and one by Brown. After the Cajuns tied things at 3, a 5-1 run gave the Red Wolves the lead for good at 8-4.

That lead would grow to as much as six at 12-6, although Louisiana’s 6-1 run brought it down to a one-point set at 13-12. After a Putt kill made it 14-12, A-State continued to keep the Cajuns from drawing any closer, matching them point-for-point for the rest of the set to take a 25-20 fourth set and force a decisive fifth set.

The Red Wolves opened the fifth set with a bang, mounting to a 6-0 lead right out of the gate on kills by Putt, Brown and Sobolewska along with an ace by Putt. The Ragin’ Cajuns could never establish any sort of momentum in the set, as the Red Wolves led by as much as seven before closing out the match. A kill by Terrell, who then teamed up on a block with Stanford made it a 10-3 set.

Kelsey Bennett’s kill was ultimately Louisiana’s last chance at keeping things going, as kills by Sobolewska and Putt ended things, vaulting the Red Wolves into the quarterfinals of the Sun Belt Conference Tournament.

Hali Wisnoskie paced the Ragin’ Cajuns with a double-double performance, tallying 19 kills and 11 digs to go along with four blocks. Bennett was the other Louisiana attacker in double-digit kills, earning 14 to accompany 15 digs.

A-State will return to the court Friday night at 5 p.m. CT against fourth-seeded Troy. The Red Wolves are looking to advance to the Sun Belt Conference semifinals once again. A-State has reached the semifinals in its last seven appearances.

Original article source: http://www.astateredwolves.com//ViewArticle.dbml?DB_OEM_ID=7200&ATCLID=211816387 | Article may or may not reflect the views of KLEK 102.5 FM or The Voice of Arkansas Minority Advocacy Council 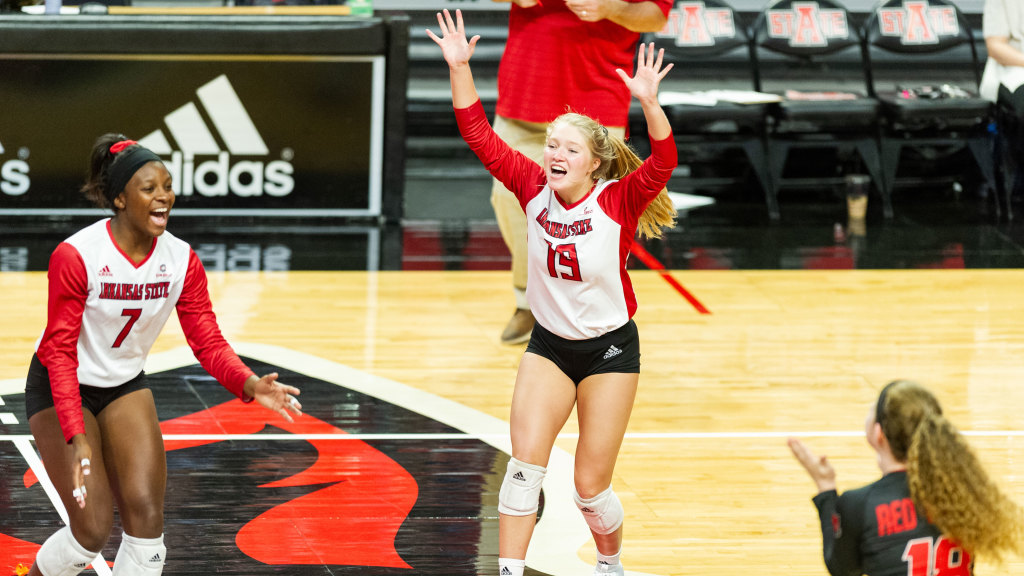