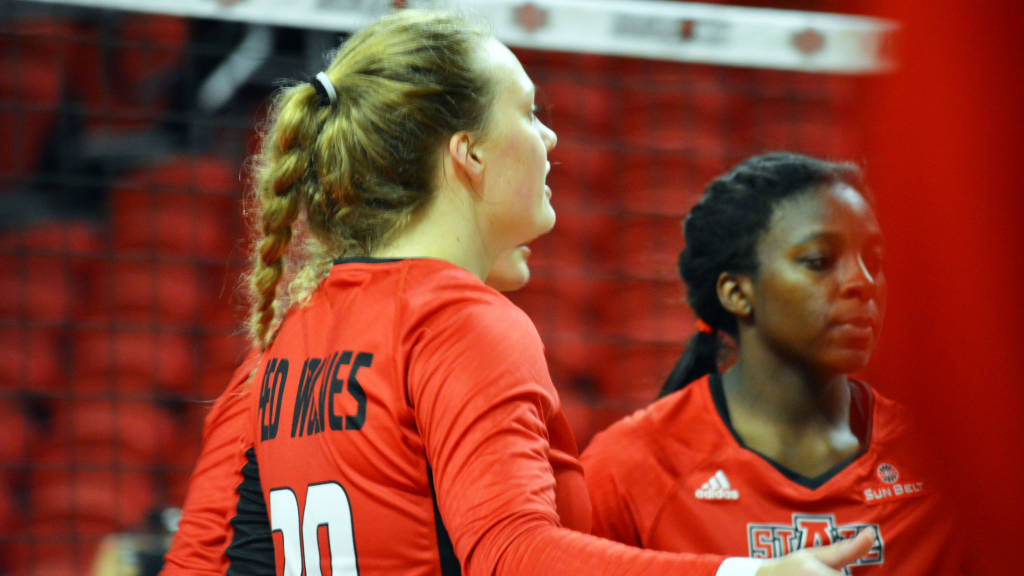 JONESBORO, Ark. (8/17/19) – With the start of the fall semester two days away, the Arkansas State volleyball team closed out its preseason practice with its Red-Black intrasquad scrimmage match on Saturday at First National Bank Arena.

Red took the match in three highly-competitive sets – 25-19, 25-21 and 25-16 – propelled by solid attacking performances from Timber Terrell and Macey Putt who both notched double-digit kills.

“I thought everybody did a very good job showcasing their abilities today,” head coach Santiago Restrepo said. “Unfortunately, playing against each another, someone had to win and someone had to lose. To me, all of them are winners today and I thought everyone did some great things. It was good seeing them play in different spots and on different sides of the court. It will be interesting to see what happens when we put them all together against a true opponent when it counts.”

Kendahl Davenport factored in 5 kills and a pair of block assists, while Peyton Uhlenhake added 9 kills and 9 digs for the Red squad. Josie Stanford tallied 5 kills for black, with Sara Betts and Brianna Hollingshed adding 3 apiece.

A-State, which finished third in the conference a year ago, was predicted by the league’s coaches to finish fourth in the West Division with 37 points earlier this month.

Original article source: http://www.astateredwolves.com//ViewArticle.dbml?DB_OEM_ID=7200&ATCLID=211809439 | Article may or may not reflect the views of KLEK 102.5 FM or The Voice of Arkansas Minority Advocacy Council