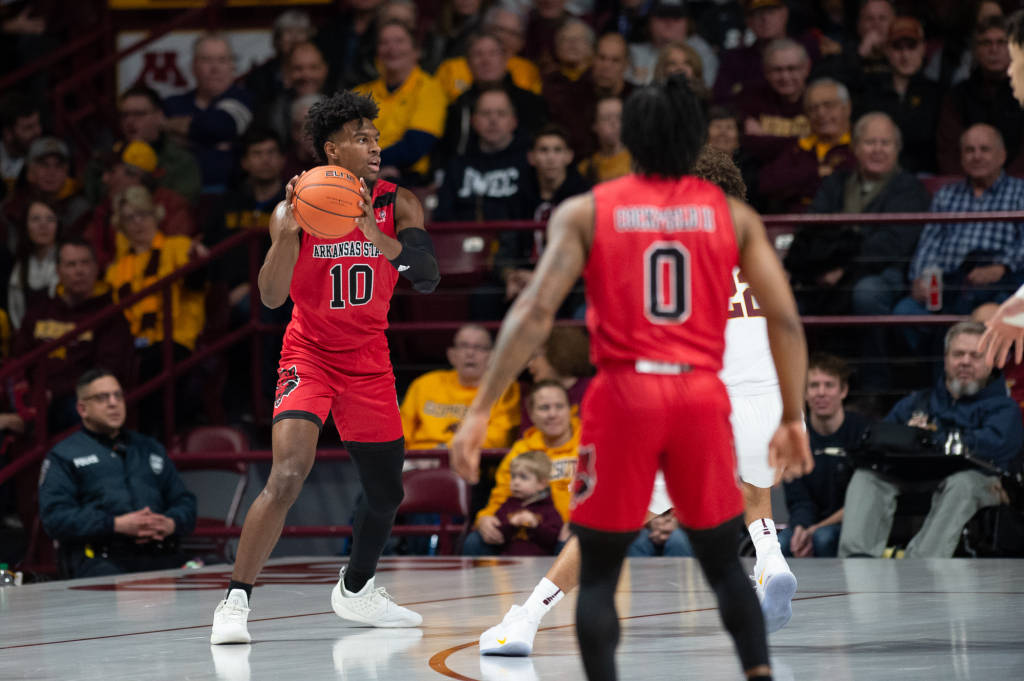 MINNEAPOLIS, Minn. (12/8/18) – Minnesota opened the game on a 21-2 run and the Arkansas State men’s basketball team was unable to recover in a 72-56 loss to the Golden Gophers Saturday afternoon at Williams Arena.

“I thought in the first half, Minnesota did a really good job of getting to the offensive glass,” said A-State head coach Mike Balado. “They had 11 offensive rebounds and only missed 17 shots, so they got 11 of those 17 misses back which was huge issue for us. We knew going in that their height would be a problem for us, but the good thing is they had 15 for the game, just four in the second half. We outscored them by one in the second half and I liked our effort. Our defense took a step tonight, but our offense unfortunately didn’t with our field goal percentage. It’s tough with those big guys down there with trying to finish over that length. Defensively, I thought our team took a step in the right direction today.”

The Golden Gophers opened the second half with a 7-3 start to build their largest lead of the night of 21 points, 48-27, but A-State refused to go away quietly. The Red Wolves held Minnesota without a field goal for a stretch of 4:43, but weren’t able to closer than 12 points despite the good defense. A-State trimmed the deficit to 12 four times in the second half, but the Golden Gophers kept A-State from getting any closer.

A-State was out-rebounded 30-16 in the first half, but Minnesota finished the day plus seven on the boards at 44-37. The Red Wolves committed just 12 turnovers, compared to 14 for Minnesota, but the Golden Gophers held an 11-8 advantage in points off those turnovers.

A-State returns to First National Bank Arena for a two-game homestand that begins Friday against Florida Atlantic. Tip-off is scheduled for 7:00 p.m.

Original article source: http://www.astateredwolves.com//ViewArticle.dbml?DB_OEM_ID=7200&ATCLID=211783269 | Article may or may not reflect the views of KLEK 102.5 FM or The Voice of Arkansas Minority Advocacy Council