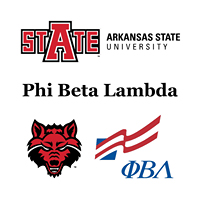 JONESBORO – Thirty-six members of the Arkansas State University chapter of Phi Beta Lambda, the collegiate version of the Future Business Leaders of America, returned from the Phi Beta Lambda National Leadership Conference in San Antonio, Texas, with a total of 22 national awards, including two national championships.

In addition, for the second consecutive year, the A-State chapter received the award for the largest chapter in the nation with 285 members.

This marks the A-State chapter’s eighth and ninth national championships since the chapter was reactivated in 2008.

“Since the chapter was reactivated, the A-State chapter has excelled in both academic and leadership areas,” said Dr. Philip Tew, associate professor of finance and co-adviser for the PBL chapter at A-State, along with Dr. Patricia Robertson, chair, Department of Economics and Finance, and professor of law.

“There have been 96 national awards won by A-State students and multiple state and national leadership positions occupied by our students.”

The group of 36 advanced to the national conference after competing in the state PBL leadership conference at North Little Rock in May. Arkansas State won 54 awards overall in the state competition.

“For the 2019-20 year alone, the state of Arkansas Phi Beta Lambda leadership team will consist of six of the seven total officer positions from A-State. This is a testament to our students and the support we have received from the Neil Griffin College of Business, the university, and alumni who have given their time and money to support these exceptional students.”

The officers include Rachel Washam (president), Ben Tinsley (treasurer), Brenna Cannon (parliamentarian), and Melanie Ricker (director of social media), who are current A-State students, while Meghan Cantara (director of state programs) and Jessica Rucker (director of marketing) are transferring from A-State after completing their associate degrees from ASU-Newport in May.

Ben Tinsley, an accounting major from Jonesboro, won sixth for accounting for professionals, and second for financial concepts.

Thomas Hamaker, a 2019 graduate with a degree in finance from Hampton, finished third for financial analysis and decision making and fourth for future business executive.

Kasey Williams, a finance and accounting double major from Clinton, was fifth in emerging business issues.

Ellie Mayberry, a business technology major from Hensley, was seventh in information management.

Mariah Odom, an accounting major from Marion, was 10th in marketing concepts.

Clayton Liddell of Paragould, a 2019 graduate with a degree in computer science, was third in programming concepts.

Dr. Robertson was recognized for her work as Arkansas adviser of the year.

Original article source: http://www.astate.edu/news/phi-beta-lambda-students-bring-home-22-national-awards | Article may or may not reflect the views of KLEK 102.5 FM or The Voice of Arkansas Minority Advocacy Council