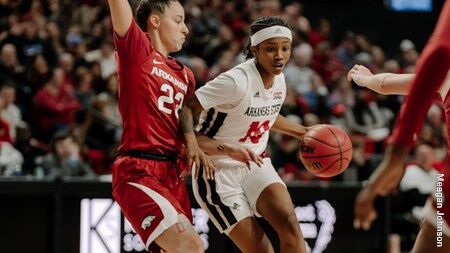 JONESBORO, Ark. (10/17/22) – With the 2022-23 women’s basketball season less than a month away, the Sun Belt Conference unveiled the preseason coaches’ poll and all-conference honors Monday morning.

The league’s coaches, who are set to converge in New Orleans for Sun Belt Conference Media Day Tuesday, predicted the Path to Pensacola and projected A-State to finish ninth. However, Head Coach Destinee Rogers‘ squad will be headlined by a pair of preseason all-league guards. The Red Wolves are one of five teams boasting two players on the three-team, 15-player list.

Keya Patton earned a first-team nod ahead of her senior season after averaging 14.3 points before a season-ending injury halted her stellar junior campaign four games into league play. Prior to the injury, Patton was the team’s leading scorer and averaged 19.5 points in four conference games, including a 30-point outburst against ULM (Jan. 8), where she went 7-of-10 from 3-point range. The Indianapolis, Ind., native scored 10-plus in all four league outings and 13 of her 16 games played, shooting 51.4 percent from the floor and 41.8 percent from deep (52 percent in Sun Belt play).

Lauryn Pendleton – the league’s Freshman of the Year last season – looks to avoid a sophomore slump and earned a spot on the third team. The Little Rock native averaged 11.3 points and 4.6 rebounds and shot 85.1 percent from the free-throw line, but upped her scoring to 12.4 points per conference game. In those league contests, she shot 43 percent from the field and 39.2 percent from 3-point range. Pendleton scored in double figures in nine of her last 10 games to end the year, including 25 in a win over eventual tournament champion UT Arlington in the regular-season finale.

Pendleton will join Rogers for the league-wide women’s basketball media day, the conference’s first in-person media day since 2012-13. A-State will take the main stage at the Caesar’s Superdome at 9:15 a.m. CT live on ESPN+.

The Red Wolves’ season begins Thursday, Nov. 10, in a tough early-season road test at Louisiana Tech. Tip-off inside the Thomas Assembly Center in Ruston, La., is set for 11:30 a.m. and will be streamed live on CUSA.tv.

Read more:
Patton, Pendleton Tabbed Preseason All-Conference; Women’s Hoops Picked Ninth. Article may or may not reflect the views of KLEK 102.5 FM or The Voice of Arkansas Minority Advocacy Council