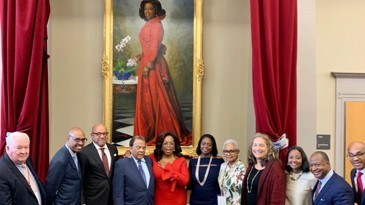 According to cnn.com, Oprah Winfrey now has the largest endowment ever at all-male HBCU Morehouse College in Atlanta after donating $13 million.

Winfrey visited Morehouse on Monday for the 30th anniversary of the Oprah Winfrey Scholars Program, the release said. The program started in 1989 and the fund stands at $12 million. Monday’s donation of $13 million pushed her total investment to $25 million.

“Seeing you young Oprah Winfrey scholars here today has moved me deeply,” Winfrey said Monday before announcing her donation. “I am so proud of you, I’m proud of everybody in attendance at this school who is seeking to know more clearly who you are, the value you hold and how you will share that value with the rest of the world.”

Oprah Winfrey returned to Morehouse College to celebrate the 30th anniversary of the Oprah Winfrey Scholars Program. Her $12 million donation to the scholarship program over the years has paid for the education of nearly 600 scholars. A portrait was unveiled in her honor today. pic.twitter.com/AE3Qell0Mk

Winfrey’s donation comes after billionaire Robert Smith promised to pay off the student loan debt of the 2019 Morehouse graduates in May. Smith donated $34 million to the school last month, making good on his promise.

“I’m grateful to Oprah Winfrey for her generosity,” said Morehouse President David A. Thomas. “I am also feeling hopeful for Morehouse and what it has garnered in terms of philanthropic support with gifts like Oprah’s and Robert Smith’s. I am hopeful that this will also get others to step up with their support of Morehouse, but even more broadly, historically black colleges and universities.”

Original article source: https://goodblacknews.org/2019/10/08/oprah-winfrey-donates-13-million-to-morehouse-college/ | Article may or may not reflect the views of KLEK 102.5 FM or The Voice of Arkansas Minority Advocacy Council