Nu-Blu Band to Perform at Bluegrass Monday
6/15/2018
Photo attached: Nu-Blu Band (Left to right) – Justin Harrison, Calder Baker, Carolyn Routh and Daniel Routh. JONESBORO – The band Nu-Blu will perform a concert of bluegrass music on Monday, June 25, at 7p.m. at the Collins Theatre, 120 West Emerson Street, in downtown Paragould. The concert is part of the Bluegrass Monday concert series presented by KASU 91.9 FM. Nu-Blu was founded in 2003 by husband-and-wife Daniel and Carolyn Routh. Over the past 15 years, the band has performed in 47 states and had multiple top 10 hits on the Billboard, Bluegrass Today and Bluegrass Unlimited music charts. In 2015, their song “That’s What Makes the Bluegrass Blue” was the most played recording on satellite radio SiriusXM’s Bluegrass Junction channel. The band describes their bluegrass style as “upbeat acoustic music played with passion, power and drive.” In addition to recording and performing traditional bluegrass and original compositions, the group also performs their own acoustic arrangements of classic country music and classic rock music. In their career, Nu-Blu has collaborated in the studio with some prominent musicians including “the Queen of Bluegrass” Rhonda Vincent, former Statler Brothers member Jimmy Fortune, and Sam Moore of the Rock and Roll Hall of Fame duo Sam and Dave. The band has also appeared on numerous television programs including Huckabee, Imus in the Morning and the Better Show. Carolyn Routh is the featured lead vocalist for Nu-Blu. She also plays bass in the band. Daniel Routh is a multi-instrumentalist who also sings. Calder Baker plays banjo in the band. Baker is a recent graduate of the bluegrass music program at East Tennessee State University where he performed in the school’s Bluegrass Pride Band, a group reserved for the top students in the program. Justin Harrison plays mandolin in the band. Harrison is a graduate of the traditional music program at Morehead State University. He toured China with the university’s Mountain Ambassadors band and is a former member of the group Karl Shiflett and Big Country Show. More information about the band is available at www.nu-blu.com<www.nu-blu.com/>. Seating at the concert is first-come, first-served. Doors to the theatre will open at 6 p.m. KASU will literally “pass the hat” during the concert to collect money to pay the group. The suggested donation is $5 per person. In addition to the concert, Terry’s Café, 201 South Pruett Street in Paragould, opens on Bluegrass Mondays to welcome bluegrass music fans. The café serves a country-style buffet meal beginning at 4:30 p.m. on the evenings of Bluegrass Monday concerts. Concessions will also be available at the Collins Theatre. Bluegrass Monday concerts are held on the fourth Monday night of each month. These concerts are presented with support from Bibb Chiropractic Center, the Posey Peddler, Holiday Inn Express and Suites of Paragould, the Northeast Arkansas Bluegrass Association and KASU. KASU, 91.9 FM, is the 100,000-watt public broadcasting service of Arkansas State University in Jonesboro. For more information, contact KASU Program Director Marty Scarbrough at [email protected]<mailto:[email protected]> or 870-972-2367. Bluegrass Monday is also on Facebook (search “Bluegrass Monday”). # # # This and other news releases also available at: AState.edu/news<www.astate.edu/news>
University Communications Arkansas State University [email protected]<mailto:[email protected]>
“Arkansas State University educates leaders, enhances intellectual growth and enriches lives.” 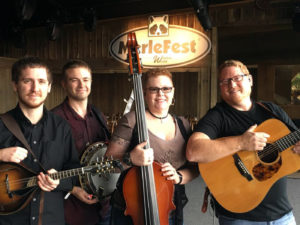 FSCIA Spring Clean Up, May 15

This weekend FSCIA will be coordinating with the City of Jonesboro to organize a clean-up for the part of north Jonesboro. There are more clean-ups on the way! ?? Original Read more