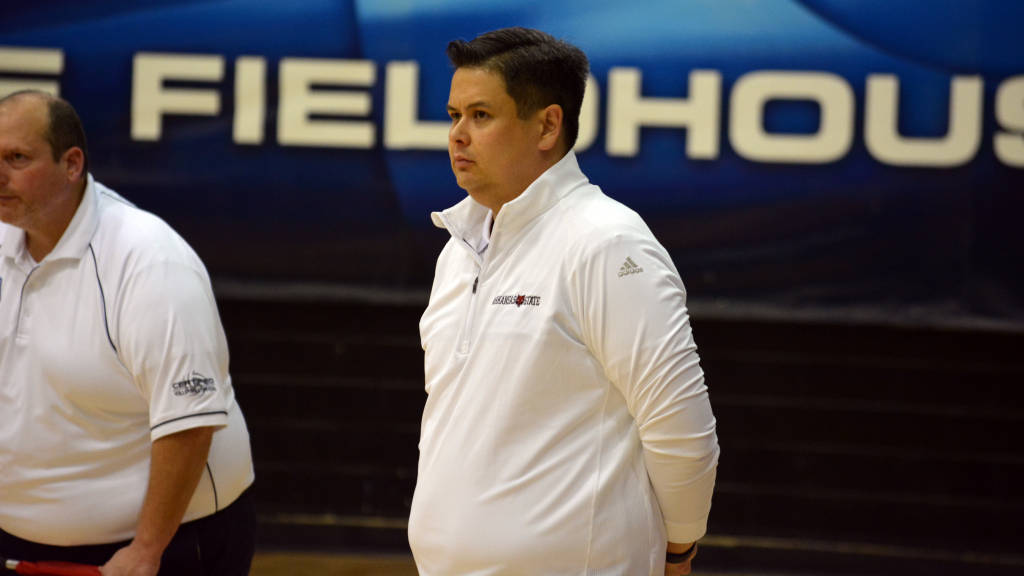 QUICK DIGS
This season is the 44th year of volleyball at Arkansas State and A-State has an all-time mark of 1,027-520-5 (.663) and had the 19th most wins in Division I and was tied for the 25th best winning percentage in Division I history entering the 2018 campaign.
A-State’s Tatum Ticknor and Ellie Watkins were honored with the SBC Defensive Player of the Week and Setter of the Week awards, respectively, after Ticknor led the league with a 5.00 digs per set mark and Watkins handed out a SBC-best 10.75 assists per set mark.
Arkansas State opened the 2018 season with a 2-1 record at the Memphis Invitational. The Red Wolves sandwiched 3-0 sweeps of UAPB and Memphis around a 3-0 setback to Stephen F. Austin. A-State is now 28-16 in season openers after the win over the Lady Lions, while the team is 9-13 in season-opening tournaments under Coach Rehr.
Carlisa May posted 36 kills (4.00 per set) at the Memphis Invitational and earned All-Tournament honors for her efforts. She also had 20 digs and had 13 kills and 10 digs versus Memphis for her first career double-double. She now has 1,353 career kills and is six away from tying Jo Beth Mathis for seventh most in school history.
Ellie Watkins was also named to the Memphis Invitational All-Tournament squad after dishing out 86 assists (10.75 per set).
13 different players saw playing time for the Red Wolves with four freshmen playing in their first collegiate matches. Freshman Macey Putt started all three contests.

A-State vs. Creighton Series History
A-State and Creighton have only played twice in history with Arkansas State winning the first matchup 3-2 in 1997 in Omaha, Neb., at the Creighton First Serve Festival, while the Bluejays swept a 3-0 contest in 2004 at the Missouri Tiger Classic in Columbia, Mo.
The Red Wolves are 10-3 against schools currently in the Big East with Coach Rehr’s only match coming last season in a 3-1 win over Georgetown at Rice Invitational II in Houston, Texas. Prior to that the last meeting as the 2004 match vs. CU.
Creighton went 1-2 to open the season at the Trojan Invitational with a win over No. 5 Kentucky, but losses to Northern Iowa and No. 10 USC. The Bluejays are currently ranked 15th in the latest American Volleyball Coaches Association Top 25 Poll.

A-State vs. SMU Series History
The Red Wolves and Mustangs have only met twice with SMU taking both matches. The Mustangs took a 3-0 decision in 1998 at Kentucky’s Conference Challenge in Lexington, Ky., before sweeping A-State last season at the A-State Invitational.
Despite the loss to SMU last season, two of the sets were close with A-State losing the first two by two points each. Ellie Watkins had 29 assists in the match with Tatum Ticknor picking up 18 digs. Brittany Adams had 10 kills for SMU, while Montana Watts had a team-best 14 digs.
Coach Rehr is 0-1 versus the Mustangs, but 7-3 against schools from the AAC after a win over Memphis this year. A-State is 52-45 against AAC institutions all-time.
SMU is 0-2 on the year with losses to Lipscomb and Iowa.

A-State vs. NC State Series History
The Red Wolves are 1-2 all-time against NC State with the win coming two seasons ago, also in Texas at the TCU Invitational, when A-State swept the Wolfpack. Prior to that A-State lost meetings in 1992 (2-3) and 2010 (0-3).
A-State is 9-20 against schools currently in the Atlantic Coast Conference after dropping a 3-0 contest to Virginia Tech a season ago. Head coach David Rehr is 1-1 against ACC schools with the win against North Carolina State in 2016.
The Wolfpack are 1-1 on the young season with a win over VCU and loss to Washington State. Both matches were played at home in Raleigh, N.C.

Ticknor, Watkins Claim SBC Honors
A-State’s Tatum Ticknor and Ellie Watkins won the Sun Belt Defensive Player of the Week and Setter of the Week, respectively, after one weekend of action.
Ticknor led the Sun Belt with a 5.00 digs per set average, while Watkins dished out 10.75 assists per set.
A-State has now seen a player claim a weekly award in 28 of 37 weeks since the beginning of the 2015 season. Over that time span A-State has won 47 weekly awards.

Opening Weekend Recap
Arkansas State went 2-1 at the Memphis Invitational Aug. 24-25 to open the 2018 campaign. A-State defeated UAPB 3-0 and Memphis 3-0, but lost to Stephen F. Austin 3-0.
A-State is now 23-0 all-time against UAPB with the 23 wins being the most against a single opponent with no losses followed by Arkansas Tech (18-0), Arkansas College, now Lyon College, (16-0), and Hendrix (16-0).
The team used 13 players in the win over the Lady Lions with freshmen Macey Putt, Isabel Theut, and Josie Stanford all collecting their first collegiate kills, while Julianna Cramer played one set at setter and handed out 11 assists. A-State held UAPB to a -.014 hitting percentage, the first time since Nov. 27, 2014 that the Red Wolves held an opponent to a negative percentage. That foe was Louisiana-Lafayette (-.066).
The loss to Stephen F. Austin dropped A-State to 6-7 all-time against the Ladyjacks after A-State had swept SFA in the previous two meetings (2015 and 2017).
The squad’s win over Memphis brought the all-time series to 29-29. Carlisa May picked up her first career double-double with 13 kills and a career-best 10 digs in the match, while Kenzie Fields had a team-best 14 kills in her return to Tennessee.

Original article source: http://www.astateredwolves.com//ViewArticle.dbml?DB_OEM_ID=7200&ATCLID=211769984 | Article may or may not reflect the views of KLEK 102.5 FM or The Voice of Arkansas Minority Advocacy Council