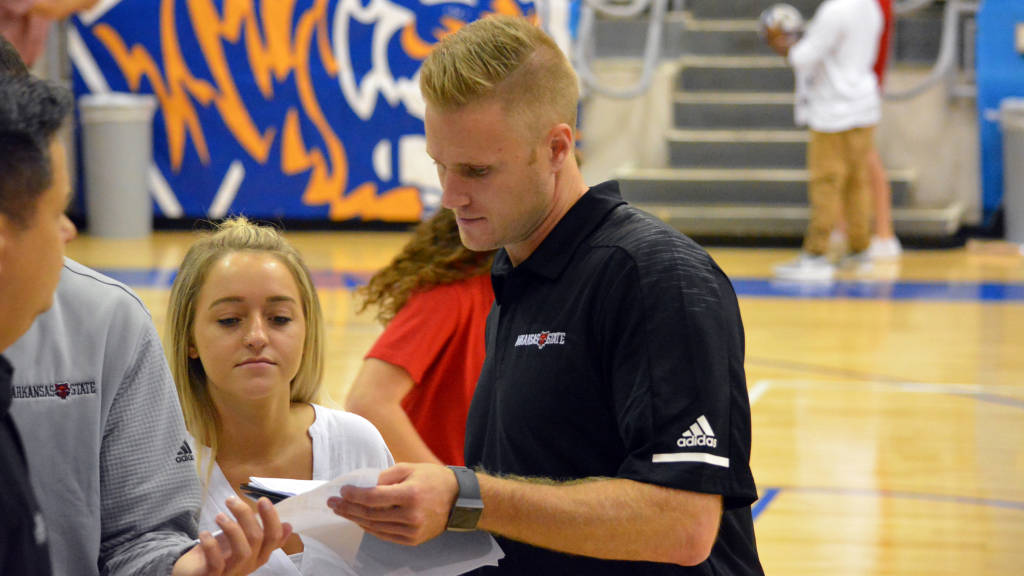 QUICK DIGS
This season is the 44th year of volleyball at Arkansas State and A-State has an all-time mark of 1,027-523-5 (.662) and had the 19th most wins in Division I and was tied for the 25th best winning percentage in Division I history entering the 2018 campaign.
Carlisa May posted 53 kills in the SMU Doubletree Classic and now has 89 for the season for a 4.45 per set average that leads the Sun Belt Conference. Additionally, the Lee’s Summit, Mo., native has 1,406 kills for her career to rank as fifth most in school history. Her 3.95 kills per set average is the second best in a career currently.
Timber Terrell had a fantastic blocking weekend at the SMU Doubletree Classic with 19 blocks for a 1.73 average at the event. The Wheeling, Ill., native has the most blocks on the team with 24.
A-State wasn’t able to win a match in the SMU Doubletree Classic to mark the first time since the 2014 season-opening George Washington Invitational that A-State went winless in a tournament.

A-State vs. UMKC Series History
A-State leads the all-time series with the Kangaroos 7-0 in a series that began in the 1996 season. The Red Wolves won the 1996 meeting 3-0 in Jonesboro before taking a win at a neutral site in 1997. A-State won meetings in Kansas City in 2004 (3-1) and 2008 (3-0) with victories at neutral sites in 2005 and 2006.
The last meeting was in 2015 when A-State opened the season at the Redhawks Invitational in Cape Girardeau, Mo. The team swept SEMO to begin the event with a 3-0 win over the Roos in the second match. Carlisa May is the only current A-State player to have played in that match with 11 kills on a .429 hitting percentage and three blocks. That’s the only time a David Rehr coached team has played them.
UMKC is 3-3 early in the 2018 campaign with wins over South Dakota State, Western Michigan, and UTEP. A-State is 22-4 against current members of the WAC with all the matchups coming against New Mexico State, UMKC, and UTRGV, formerly Texas-Pan American.

A-State vs. Southeast Missouri Series History
The Red Wolves lead the all-time series with SEMO by a count of 26-20, but the two teams haven’t played since A-State swept the Redhawks to open the 2015 season. Carlisa May had eight kills on a .357 hitting percentage in that match.
The series began in 1978 with A-State winning both meetings. A-State had a win streak of six matches in the series from 1990 to 1995, while Southeast Missouri took five straight matches during the 1986 and 1987 seasons. Head coach David Rehr is 2-0 against SEMO with the 2015 win and a 3-2 win at Southeast Missouri in 2012. A-State has won three straight with the Redhawks’ last win coming in the 2009 opener.
The Red Wolves are 110-46 against schools currently in the Ohio Valley Conference and have played every school in the league. Head coach David Rehr is 7-1 all-time against the OVC.
Southeast Missouri is currently 6-2 on the year and has wins over Sun Belt schools Troy and ULM, both by scores of 3-0, and also defeated Southern Illinois, who A-State plays later on this season.

A-State vs. Providence Series History
Friday’s meeting will be the first between the Red Wolves and Friars.
A-State is 10-4 against schools from the Big East with last weekend’s 3-0 loss to No. 15 Creighton representing the latest decision. Head Coach David Rehr is 1-1 with a win over Georgetown last season at the Rice Invitational II. Prior to last season’s match against the Hoyas, A-State had not played a school currently in the league since 2004.
Providence is 4-2 on the season after winning all three matches at its home tournament last weekend over UMass-Lowell, Fairleigh Dickinson, and Brown.

A-State vs. SIUE Series History
A-State has only played the Cougars twice in school history with a sweep in 2014 before winning a 3-1 decision last year in the NIVC in Oxford, Miss. Carlisa May posted 21 kills in the win, while Kenzie Fields had a double-double with 10 kills and 11 digs.
SIUE is also a member of the OVC and Coach Rehr is 2-0 against the Cougars. Prior to last season’s meeting in the NIVC, SIUE was the only OVC school A-State hadn’t played more than once. SIUE is 0-6 on the year so far.

Recapping the SMU Doubletree Classic
Carlisa May knocked in 53 kills in the event, with a 21-kill effort against NC State, her first 20+ kill effort in 2018 after having nine in 2017. She has 14 in her career.
Macey Putt had her first double-double against NC State with 10 kills and 10 digs and is the first freshman with one since Sheridan Webb had one in 2017.
Timber Terrell’s 19 blocks during a three-match tournament are the most in one even since 2010, with the next closest being Kariana Castanon-Hill’s 16 in the 2015 SBC Tournament.

Original article source: http://www.astateredwolves.com//ViewArticle.dbml?DB_OEM_ID=7200&ATCLID=211770762 | Article may or may not reflect the views of KLEK 102.5 FM or The Voice of Arkansas Minority Advocacy Council