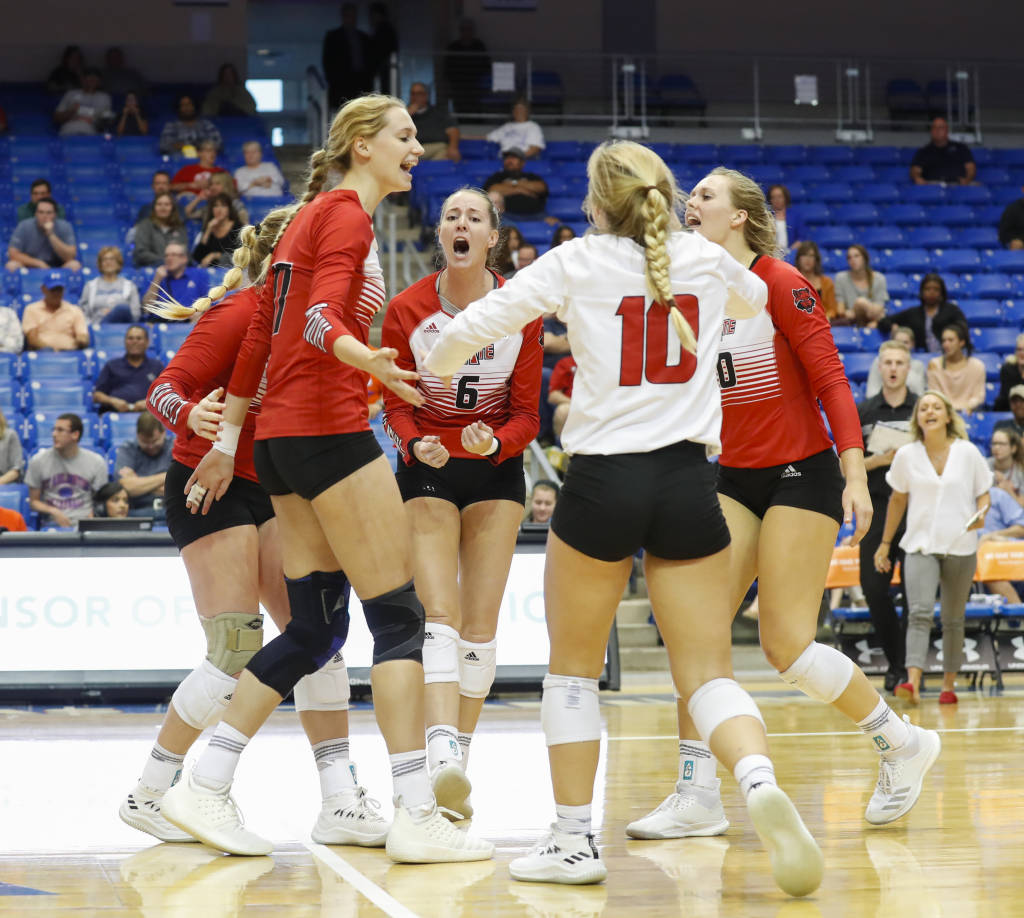 QUICK DIGS
This season is the 44th year of volleyball at Arkansas State and A-State has an all-time mark of 1,035-526-5 (.661) and had the 19th most wins in Division I and was tied for the 25th best winning percentage in Division I history entering the 2018 campaign.
The Red Wolves had their eight match winning streak snapped with a heartbreaking five-set loss to UT Arlington on Sept. 28. A-State and the Mavericks battled back and forth and traded sets with UTA prevailing 15-13 in the final set to take the win.
A-State has never lost to Appalachian State and are a perfect 7-0 against the Mountaineers. Despite having never lost, the matches have been tightly contested Three of the seven matches have been gone to five sets, including the 2015 Sun Belt Conference championship match,where A-State rallied from a 2-0 deficit to complete the back and take the championship.
Senior Carlisa May was named the Sun Belt Offensive Player of the Week on Sept. 24 after averaging 5.75 kills per set (46 kills) over the first two matches of SBC play. The Lee’s Summit, Mo., native posted 17 against Troy before 29 against South Alabama, the most by an A-State player since at least 2010. It is also the most by a SBC player this season, four more than the next closest.
The award for May was the 15th weekly award of her career, while it was the third of the season for A-State after Tatum Ticknor and Ellie Watkins earned awards after week one.
Madison Turner tied a career high with seven blocks in the win over Troy and had 10 blocks over both matches for a 1.25 per set mark that is tied for fifth best in the SBC through two league matches.
The win over Troy improved A-State to 18-1 all-time against the Trojans and is the eighth straight win over Troy. The come-from-behind win over South Alabama was the first win for the Red Wolves after falling behind 0-2 this year and last since Sept. 3, 2016 when A-State rallied to beat Cal Poly 3-2.

A-State vs. Coastal Carolina Series History
Coastal Carolina won both matchups in 2017, including a 3-1 victory over A-State in the semifinals of the Sun Belt Conference Tournament. The Chanticleers went on the win the tournament and earn the automatic berth in the NCAA Tournament. It was the second straight season that Coastal Carolina had knocked A-State out of the tournament.
The Red Wolves and Chanticleers split both meetings in 2016 with A-State earning a 3-2 win over Coastal Carolina in Conway, S.C., Sept. 25 before CCU claimed a 3-1 decision in the SBC Tournament finals Nov. 20. Both meetings were the first in school history.
In the five-set win over the Chanticleers, Carlisa May led the team with 16 kills, while Kenzie Fields had a double-double with 14 kills and 13 digs. Mallory Warrington handed out 54 assists and Markie Schaedig registered 36 digs. Leah Hardeman led Coastal with 21 kills and 20 digs.
May and Fields led the team in kills once again in the 3-1 loss in the Sun Belt Tournament finals with 13 and 11, respectively, with Fields posting another double-double with 11 digs. A-State hit .162 to Coastal Carolina’s .196 while Tahlea Bishop led the Chanticleers with 15 kills and Hardeman posted another double-double with 14 kills and 18 digs.
The split with Coastal Carolina moved A-State to 5-2 all-time against competition from South Carolina. Arkansas State is 2-0 against South Carolina and 1-0 versus The Citadel and Presbyterian. The only other loss is to Clemson.
The Chanticleers enter the weekend with a 3-6 record with wins over UTSA, Indiana State, and American. Their losses are to TCU, Iowa (x2), Florida Atlantic, Duke, and No. 24 North Carolina (in five sets). Coastal had to adjust its schedule due to Hurricane Irma and had to cancel its home tournament a couple of weekends ago.

A-State vs. Appalachian State Series History
Arkansas State is 7-0 all-time against App State with all six matches occurring since the Mountaineers joined the Sun Belt Conference in 2014.
A-State won both matches in 2014 by scores of 3-2 in Jonesboro and 3-1 at Boone, N.C. The two teams met three times in 2015 with A-State winning 3-1 in Boone on Nov. 8 before the Apps made the trip to Jonesboro Nov. 12 with A-State claiming a sweep in front of a volleyball-only record crowd of 2,517. The two squads then met again Nov. 22 in the SBC Tournament finals in Statesboro, Ga. A-State rallied from a 2-0 deficit to defeat the Mountaineers and posted 17 blocks to earn the Sun Belt’s automatic bid to the NCAA Tournament.
The Red Wolves won the lone meeting last season by a count of 3-2 in Jonesboro with Carlisa May leading the team with 16 kills. In all, A-State had five players finish in double figues, while Sheridan Webb finished with 57 assists. In addition, five differet Red Wolves also had double-digit digs in the match.
Appalachian State enters the weekend with a 12-4 record and a perfect 4-0 mark in league play. The Apps have claimed wins over Davidson, UNC Ashville, The Citadel, Furman and Wnthrop in non-conference play. The Mountaineers play Little Rock on Friday night.

Original article source: http://www.astateredwolves.com//ViewArticle.dbml?DB_OEM_ID=7200&ATCLID=211774695 | Article may or may not reflect the views of KLEK 102.5 FM or The Voice of Arkansas Minority Advocacy Council