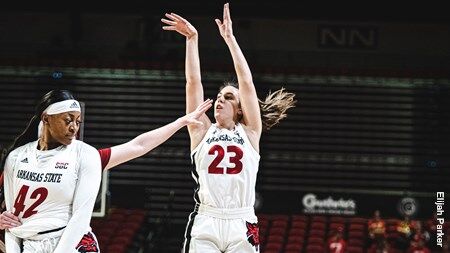 JONESBORO, Ark. (11/22/22) – The Arkansas State women’s basketball team was within four points of No. 22 Oklahoma late in the third quarter, but the Red Wolves couldn’t overcome a big fourth quarter by the Sooners in a 95-70 setback Tuesday night at First National Bank Arena.

A-State (2-3) was led by five players scoring in double figures, including sophomore guard Izzy Higginbottom with a team-high 15 points. Although Oklahoma (5-1) had just three players who reached double digits, it used six players off its bench who outscored the Red Wolves’ reserves 44-20.

A-State completed the game with .375 shooting percentage compared to Oklahoma’s .521 mark, but the Sooners hit 73 percent of their shots in the fourth quarter as they outscored the Red Wolves 34-19.

The Sooners held a slight 43-39 advantage on the boards, but took advantage of 15 steals and scored 52 points in the paint to A-State’s 30.

Arkansas State remains at home for its next game, hosting Kansas City Saturday, Nov. 26, at 11:00 a.m. There will be free admission to the game, which can also be heard live via the EAB Red Wolves Sports Network station 95.3 and 96.9 The Ticket Radio Network.

Continued here:
No. 22 Oklahoma Uses Big Fourth Quarter to Top A-State Women’s Basketball. Article may or may not reflect the views of KLEK 102.5 FM or The Voice of Arkansas Minority Advocacy Council