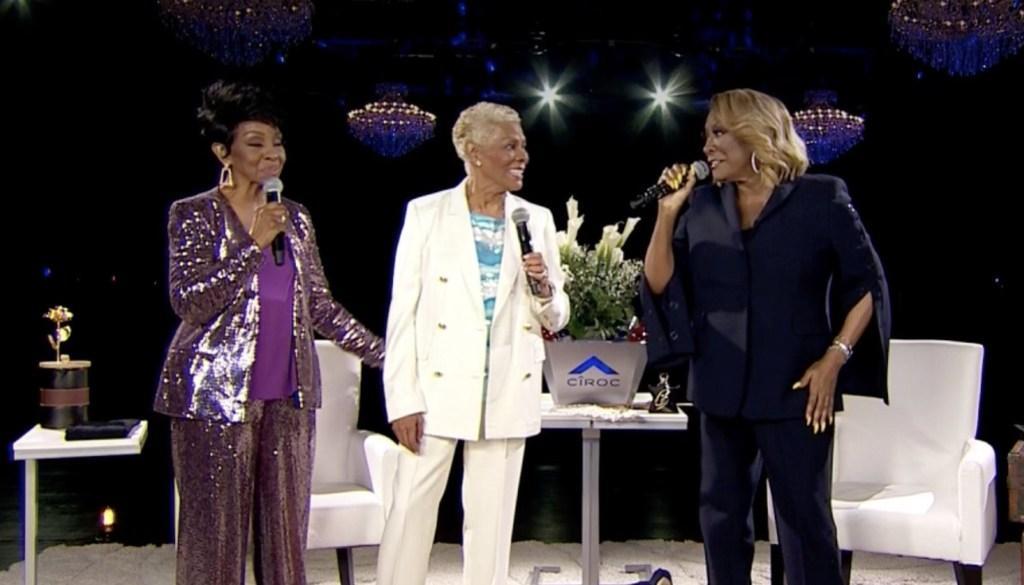 We know where you were last night. Millions of fans of a certain age were enjoying the stay-at-home celebration dubbed by the internet as “AuntieChella,” as Gladys Knight and Patti Labelle ‘battled’ it out on Instagram/Apple Music‘s “Verzuz” series.

Verzuz was created a few months ago by hitmaking producers Timbaland and Swizz Beatz as a way for music fans to honor their greats while relaxing at home during these quarantine times.

For those of you who haven’t checked it out yet, the sessions are not truly a ‘battle’ – but rather an occasion for two legends to get together (whether in real life like last night, or virtually) and banter about their careers while having a listening party of the greatest hits of each artist.

The battle was epic, with both ladies, now in their late ’70s, decked out in stylish pantsuits, and sharing their love for each other amidst career stories, lots of live singing, and plenty of chair grooving.

Michelle Obama, Oprah, and Queen Latifah were tuned in to hear such hits as “Midnight Train to Georgia,” “Over the Rainbow,” “You Are My Friend” and ‘The Best Thing That Ever Happened to Me.”

Gladys honored all phases of her career, delving back into her early doo-wop hit “Every Beat of My Heart,” her Motown Pips years with “Friendship Train,” her ’80s hits like “Love Overboard” and the Bond theme “License to Kill.”

Patti focused on her material from her solo years, mixing ballad favorites like “Somebody Loves You Baby” and “If Only You Knew” with uptempo hits like “The Right Kinda Lover” and “Feels Like Another One.”

The evening was capped off when Dionne Warwick surprised the audience with a special appearance to end the show, as they joined her to sing “That’s What Friends Are For” and their hit version of “Superwoman.”

The three of them had previously worked together on a special called “Sisters in the Name of Love” that Gladys had produced for HBO in the late ’80s (there are some fan posts of it on YouTube that offer some thrilling harmonies).

Of course with these vets, even a couple of hours of hits doesn’t come close to diving into their full careers. So in case you were ready for more, we’ve done that work for you – pairing up additional Patti and Gladys hits and deep tracks from the rest of their six decade careers for GBN’s latest playlist: “Gladys Knight Verzuz Patti Labelle – The Best of the Rest.”

We’ve gone beyond the biggest hits, and focused solely on extensive additional material they did not cover during last night’s show.

While Patti and Gladys both hit the charts for the first time in the very early ’60s – their careers have actually taken very divergent paths before, in more recent years, they’ve ended up as favorite Aunties to the Black community.

Both took a few extra laps around the track in the last few years with appearances on shows like “Dancing with the Stars” and “The Masked Singer” and products like Patti’s multiple cookbooks and line of Walmart baked goods.

Gladys first hit the public’s attention as an 8 year old performer on TV’s “The Ted Mack Amateur Hour” in the ’50s, and joining with her brother and cousins to form Gladys Knight & The Pips in the early ’60s.

Even prior to their late ’60s Motown signing, they were hitting the charts with “Letter Full of Tears” and the original version of the Van McCoy‘s heartbreak tune “Giving Up” – later slowed down and turned into a devastating standard by Donny Hathaway, and by Lonette McKee in the original movie version of “Sparkle.”

Motown brought the group consistent songwriting and production, and over a dozen hits, including the first hit version of “I Heard It Through the Grapevine,” “If I Were Your Woman” and “Neither One of Us (Wants to Be the First to Say Goodbye).”

But it was when Gladys and the Pips left Motown that they finally hit their stride on Buddah Records where they hit with “Midnight Train,” “I’ve Got To Us My Imagination” and the Curtis Mayfield written-and-produced songs from the soundtrack to the movie “Claudine.”

The ’80s brought an additional swath of hits, ranging from one of the earliest versions of “Wind Beneath My Wings” (entitled “Hero” – a half decade before Bette Midler took it to the top of the pop charts), as well as uptempo numbers like “Save the Overtime For Me” and “Lovin’ on Next to Nothin.”

In the ’90s, Gladys & The Pips disbanded, and she’s continued to record as a solo artist since then, including several gospel albums and an album of standards.

While Patti released her first records in the same era as Gladys, her path to superstardom was a lot more circuitous. As lead of Patti Labelle & The BlueBelles, Patti toured and recorded throughout the ’60s, but the big time eluded her.

A redesign of the group into rock funk trio Labelle in the early ’70s was innovative and ground-breaking, and brought critical acclaim. But not until several albums in did they finally strike gold with “Lady Marmalade,” the legendary disco song about a French-speaking lady of the evening.

Patti’s subsequent solo career allowed her to finally really shine. And it wasn’t until the ’80s, when Gladys was already at veteran status, that Patti finally hit her stride with both the hits included in #Verzuz, but also with sensuous collaborations with folks like Bobby Womack (“Love Has Finally Come at Last”) and Grover Washington, Jr. (“The Best Is Yet to Come”).

For our “The Best of the Rest” playlist, we’ve delved into Gladys’ many more hits with Motown, as well as missing late ’70s and early ’80s tracks from the disco years, tracks from her gospel side and her performances of American standards.

From Patti, we’ve included songs from her Bluebelles and Labelle years that Verzuz ignored, as well as deep cuts from her early solo years.  Both performers are renowned for their live performances, and we’ve included favorite gems from those as well.

Gladys Verzuz Patti was a battle for the ages – and any true fan of soul divas will hopefully brave the crowds at Walmart to grab a slice of Patti pie and curl up on the sofa for an extended listen to both of their illustrious careers with this extended playlist.

Original article source: https://goodblacknews.org/2020/09/14/music-gladys-knight-verzuz-patti-labelle-celebrating-legends-with-the-best-of-the-rest-playlist-listen/ | Article may or may not reflect the views of KLEK 102.5 FM or The Voice of Arkansas Minority Advocacy Council