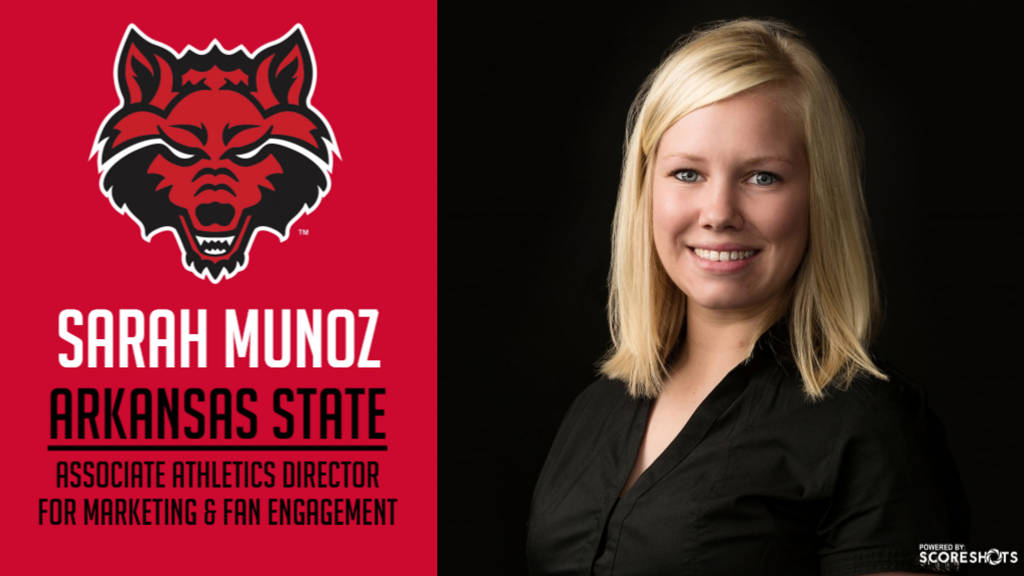 Munoz is making her second stop at Arkansas State, previously serving as Athletics Marketing Coordinator in 2012 before being elevated to Assistant Athletics Director for Marketing and Fan Experience in 2013.

She returns to A-State after spending almost four years (2014-18) at Auburn in a couple of roles, including working as the Assistant Director of Marketing from 2015-18. She was a member of the Tigers’ staff that is currently a 2018 NACMA Marketing Team of the Year Finalist.

“We’re very excited to have Sarah back at Arkansas State,” said Mohajir. “She brings strong experience with her marketing and fan engagement background, and she will be a tremendous asset to our growth.”

During Munoz’ time developing and implementing the marketing plan for multiple sports at Auburn, the Tigers saw significant increases in attendance, ticket sales and revenue. The women’s soccer team brought in the largest home crowd for an NCAA match in 2015, while the softball program ranked second in the nation in attendance for the 2017 season.

All three seasons she worked directly with women’s basketball, the sport saw an upswing in tickets sold and revenue generated. The program also posted several single-game and season attendance figures that ranked among the top-10 best in school history.

Additionally, Munoz acted as the principal contact with the athletics department’s web provider, managed trade agreement contracts and served as a department liaison with the band, mascot and spirit squads.

“It’s an honor to rejoin the Arkansas State family,” said Munoz. “I appreciate Terry Mohajir giving me this opportunity that will allow me to work alongside not only the outstanding staff, coaches and student-athletes here at A-State, but also a passionate and energetic Red Wolves’ fan base.”

A Topeka, Kan., native, Munoz began her career in collegiate athletics as a marketing graduate assistant at Kansas State University, where she earned her Master of Business Administration degree in 2012. She graduated from Baker (Kan.) University in 2009 with her bachelor’s degree in marketing and management.

Original article source: http://www.astateredwolves.com//ViewArticle.dbml?DB_OEM_ID=7200&ATCLID=211719136 | Article may or may not reflect the views of KLEK 102.5 FM or The Voice of Arkansas Minority Advocacy Council