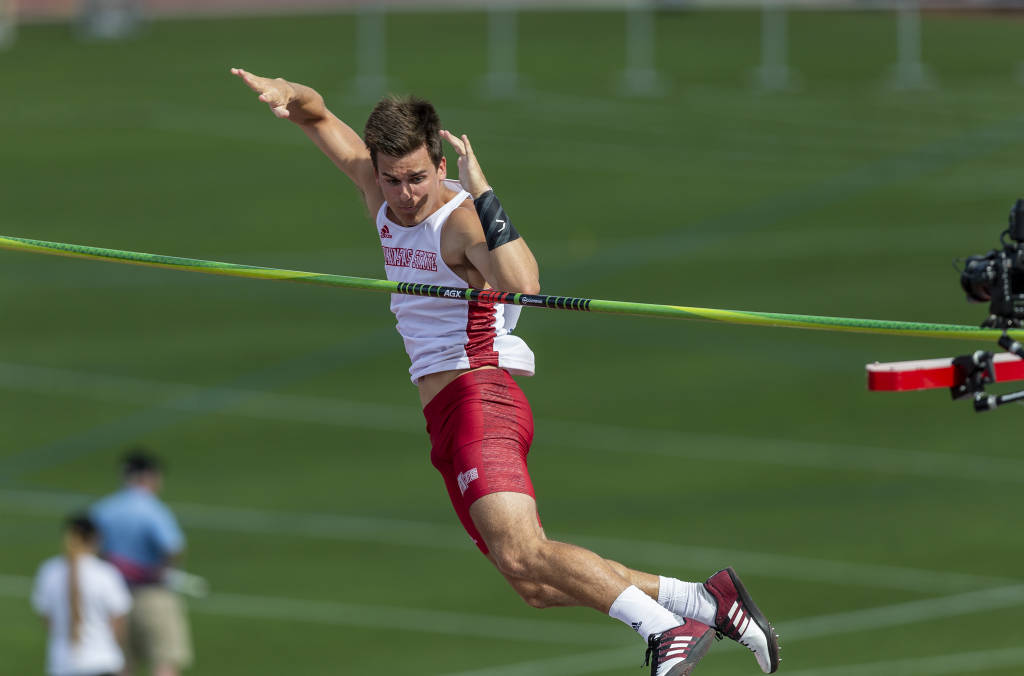 Making his NCAA Outdoor Championships debut, Carr saved his best collegiate outing for the biggest stage. Equaling his personal-best with a clearance on the third height (5.50m/18-0.50), Carr cleared 5.60m (18-4.50) before breaking the school record established in 1976 by Earl Bell (5.67m/18-7.25) by clearing 5.70m (18-8.25) to finish fifth. The fifth place finish earns him First Team All-America honors. The clearance qualifies him for the USA Track & Field Championships in which he will compete on July 27 at 2:00 p.m. (CT) in Des Moines, Iowa.

“What can you say about Michael, but it is probably the greatest performance we have seen since Sharika Nelvis won the national championship,” said A-State head coach Jim Patchell. He broke Earl Bell’s record and jumped about an eight inch personal best today. It was awesome to see him do that and I could not be more proud of him. Watching him today, I turned from a coach into a fan and cheered him on as we witnessed Arkansas State history take place. Coach Matt Vining has done an outstanding job with Michael, and we are just so happy for him in his senior year with all the work he’s put in and how he’s led the team. To see him finish off like this is truly something special.”

Sophomore long jumper Carter Shell finished 14th in the long jump with a season-best leap of 7.67m (25-2). Shell posted his best jump of the day on his third and final attempt to earn Second Team All-America honors. He improved upon his 23rd place finish last season at the NCAA Outdoor Track and Field Championships.

“Carter had an outstanding day today and jumped a season-best,” Patchell said. “He finished second team All-American as a sophomore and rose to the occasion today. He was a little gun shy last year, but he did what he had to do today. He wanted first team All-American, but I’m proud of him for how he competed. If you take out the nine seniors in front of him, he finished fifth.”

The 2019 NCAA Outdoor Track & Field Championships will be televised on the ESPN family of networks, including ESPN, ESPN2, ESPNU, and ESPN3. A complete list of streams can be found at https://www.ncaa.com/championships/trackfield-outdoor/d1/broadcast-info. Live results can be viewed at https://dt8v5llb2dwhs.cloudfront.net/NCAA/index.htm.

Original article source: http://www.astateredwolves.com//ViewArticle.dbml?DB_OEM_ID=7200&ATCLID=211804940 | Article may or may not reflect the views of KLEK 102.5 FM or The Voice of Arkansas Minority Advocacy Council