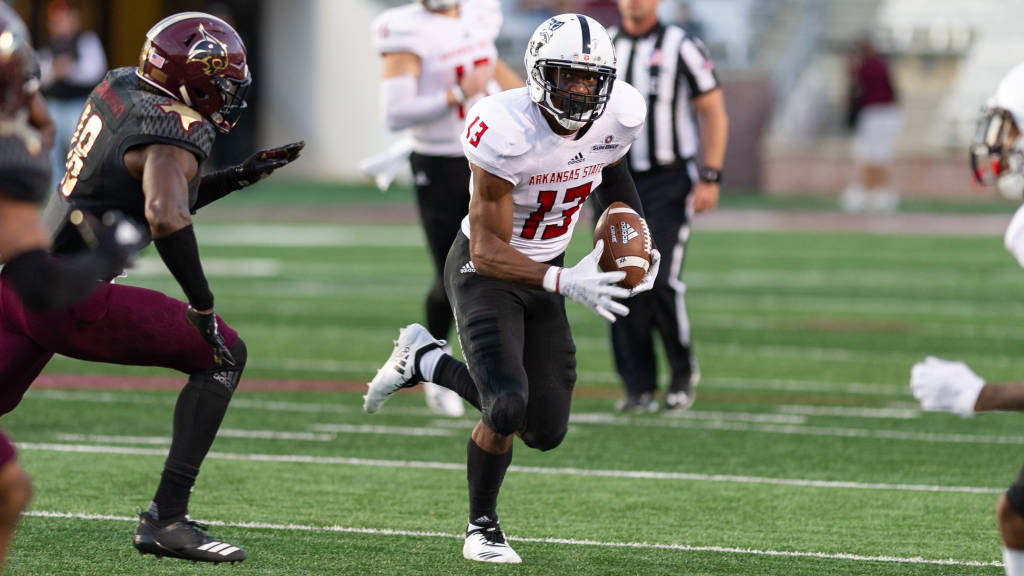 Merritt is one of 50 players from across the nation to find a place on this year’s watch list for the award, which is issued annually to the nation’s outstanding FBS receiver regardless of position.  He is one of 17 players from a Group of 5 conference and the only player from the Sun Belt to receive the recognition.

Merritt has also been tabbed as a 2019 Preseason First Team All-Sun Belt Conference selection and to the watch list for the Maxwell Award, which recognizes America’s college player of the year.  He is one of just 11 players in the nation to be named to both the Maxwell and Biletnikoff Award watch lists.

A First Team All-Sun Belt selection and the league’s Newcomer of the Year in 2018, Merritt is coming off one of the best seasons ever assembled by an A-State wide receiver.  He recorded 83 receptions for 1,005 yards, which were both the third most in school history.  He averaged 6.4 receptions per game to rank 20th in the nation, while his total receiving yards ranked 35th.

Merritt completed the year with five receiving touchdowns while also hitting the 100-yard mark in three outings, including a season-high 180 yards against Coastal Carolina that were the ninth most in A-State history for a single game.

The Biletnikoff Award is a member of the National College Football Awards Association (NCFAA), which encompasses the most prestigious awards in college football.  Founded in 1997, the NCFAA and its 25 awards now boast over 800 recipients, dating to 1935.

Original article source: http://www.astateredwolves.com//ViewArticle.dbml?DB_OEM_ID=7200&ATCLID=211807429 | Article may or may not reflect the views of KLEK 102.5 FM or The Voice of Arkansas Minority Advocacy Council