May, Putt Lift @AStateVB to Victory Over UCA
0 Comments 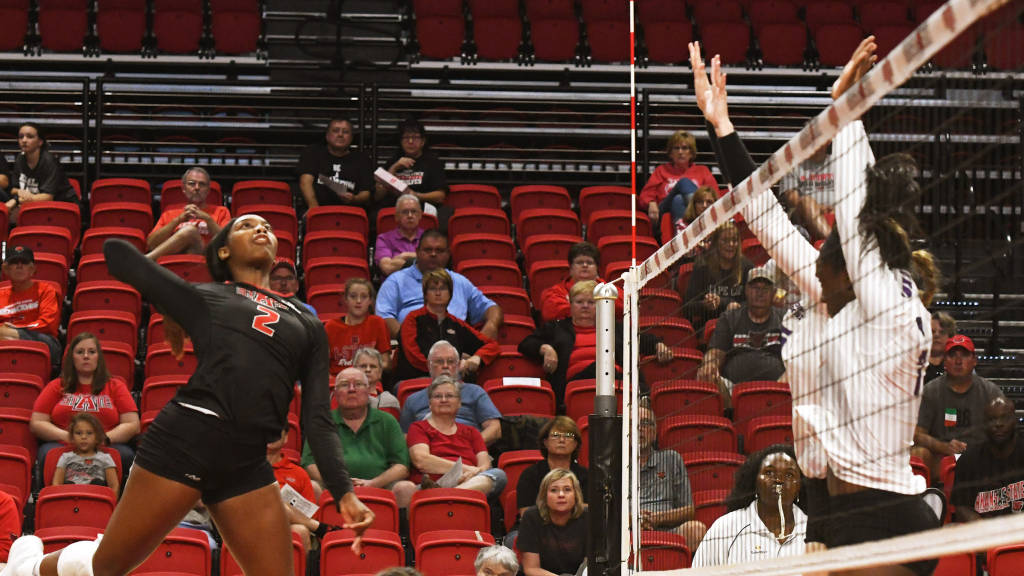 May connected on 24 kills in the match on a .300 attacking percentage, while Putt posted 17 of her own to lead the Red Wolves (6-5) to their fourth straight win. Ellie Watkins dished out a season-high 51 assists, while Peyton Uhlenhake added eight kills on a .357 attacking percentage. Defensively, Tatum Ticknor led the Red Wolves with 17 digs, while May added 10 for her team-high fourth double-double. Isabel Theut led A-State with four blocks with Madison Turner adding three.

A-State out hit UCA (8-3) .247-.232 and had five aces to the visitor’s one. Both teams posted seven blocks, but the Sugar Bears had 59 digs to the Red Wolves’ 57. Samantha Anderson recorded 18 kills for UCA, while Savannah Allen chipped in with 14.

“I knew this would be a fight tonight,” A-State head volleyball coach David Rehr said. “UCA has a good team, but our squad remembers losing to them last year so we were motivated to have a good showing in home opener. I thought we played well and they made some adjustments in the third set, but we were able to respond in the fourth and get us the win. We can usually count on Carlisa (May) to be solid, but whenever Macey (Putt) plays as strong as she did we can be hard to beat.”

A-State jumped in front 11-7 in set three, but an 11-2 run put UCA ahead 18-13 to control the frame as the Sugar Bears claimed the set 25-19. The fourth set was back-and-forth until the Red Wolves extended their advantage to 17-14 to force a timeout by Central Arkansas. The Sugar Bears fought to within one of A-State at 19-18, but the home team responded with a 6-4 run to close the set with a kill by May clinching match point at 25-22.

Original article source: http://www.astateredwolves.com//ViewArticle.dbml?DB_OEM_ID=7200&ATCLID=211771928 | Article may or may not reflect the views of KLEK 102.5 FM or The Voice of Arkansas Minority Advocacy Council