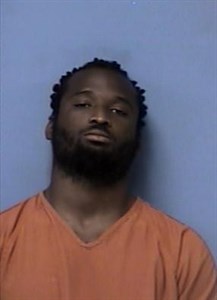 MARION, AR – Second Judicial District Prosecuting Attorney Scott Ellington announces that Brandon James, 28, pleaded guilty to Second Degree Murder and Possession of a Firearm by a Certain Person on Tuesday after a jury was called to hear his case. James was sentenced to forty-five years in the Arkansas Department of Corrections for Murder in the Second Degree with an additional 10 years suspended imposition of sentence on the charge of Possession of a Firearm by a Certain Person, both as a habitual offender, by Judge Dan Ritchey. The victim was the defendant’s grandfather, Eddie James, 79, of Crawfordsville, Arkansas.

On April 25, 2017, Crittenden County Sherriff’s Department responded to a call regarding a domestic battery in Crawfordsville, AR. It was determined that Brandon James had struck Eddie James in the head with his fist and kicked him twice in the head during an argument at their home. Eddie James later died on August 20, 2017 due to complications from blunt force head trauma resulting from his injuries.

Deputy Prosecuting Attorney Matthew Coe prosecuted the case for the State of Arkansas. District Attorney Ellington said, “I want to thank Deputy Prosecutor Matt Coe for his drive to pursue justice in this case. I also want to thank Crittenden County Sheriff’s Department for their thorough investigation. Finally, I want to extend a thank you to the citizens of Crittenden County who answered the call for jury service. Even though they didn’t hear the case, their willingness to serve forced the defendant to decide he wanted to accept responsibility for his actions rather than allow a jury to decide his fate, and my office always appreciates the sacrifice jurors make.”

Original article source: https://www.yourprosecutor.org/2018/12/man-enters-guilty-plea-after-seeing-jury-enter-courtroom/ | Article may or may not reflect the views of KLEK 102.5 FM or The Voice of Arkansas Minority Advocacy Council