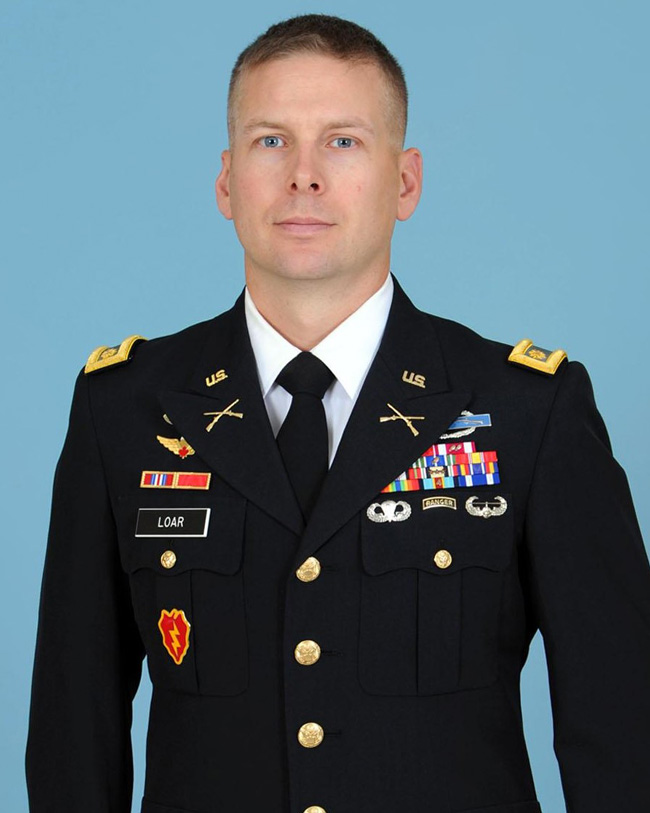 JONESBORO – Maj. Joseph (Joe) Loar has been assigned as professor of military science in the Army ROTC Program at Arkansas State University.

Loar earned a bachelor’s degree in history at the University of Tennessee and commissioned as an infantry officer in 2005.  He later earned a master’s in military arts and science with general studies and a focus in history from the Command and General Staff College in 2015.

“We welcome Maj. Loar to Arkansas State and the Red Wolf Battalion,” stated Chancellor Kelly Damphousse.  “The ROTC program has a rich history at A-State since its founding in 1936, and we look forward seeing the new professor of military science lead the program, which prepares future Army officers.”

His last assignment before assuming duties at A-State was operations advisor for 3rd Squadron, 1st Security Force Assistance Brigade at Fort Benning, Ga., and a deployment in support of Operation Freedom’s Sentinel in southeast Afghanistan.

“I am absolutely honored to join the Red Wolf family, this historic ROTC program, and the Jonesboro community,” Maj. Loar commented.  “Our team here in the Military Science Department is excited about this upcoming school year as we provide a resource for this region’s scholar athletes to serve their nation as adaptive leaders who excel and win in any environment.”

Upon redeployment from Operation Iraqi Freedom in 2009, Maj. Loar attended the Infantry Maneuver Captains Career Course.  In 3rd Brigade, 82nd Airborne Division, he assumed duties as the assistant operations officer prior to taking command in A Company, 1st Battalion 505th PIR from 2010-2011 followed by a second command in HHC, 2nd Battalion 505th PIR from 2011-2012.

After company command, Maj. Loar served as the aide de camp to the commanding general, U.S. Army Africa, from 2012-2014 before attending Command and General Staff College (CGSC) at Ft. Leavenworth, Kan.  After graduation in 2015, he was assigned to the 101st Airborne Division at Fort Campbell, Ky.

Married to the former Kelli Ellis, Loar and his wife have two children, Andrew, 14, and Derrick, 13.

Original article source: http://www.astate.edu/news/maj-joseph-loar-named-professor-of-military-science | Article may or may not reflect the views of KLEK 102.5 FM or The Voice of Arkansas Minority Advocacy Council