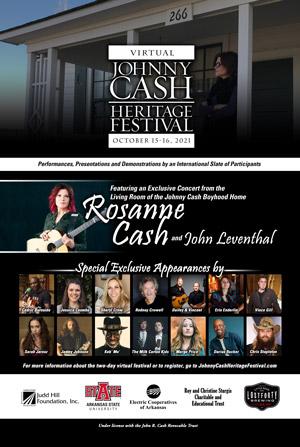 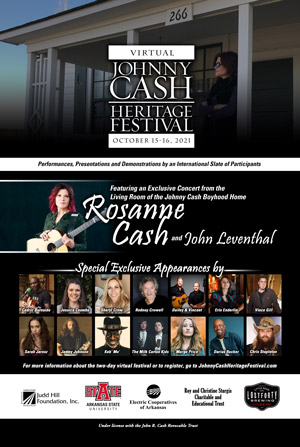 The festival, scheduled to stream Friday and Saturday, Oct. 15-16, and then be available on-demand for ticketholders for a week, will feature an international slate of presenters and performers, including exclusive musical performances by some of the industry’s leading names.

The feature performance of the festival is the first-ever concert from inside the Johnny Cash Boyhood Home by Cash’s daughter Grammy Award-winning singer/songwriter Rosanne Cash. In addition to her own performance, Cash has curated a series of exclusive performances by 14 other artists.

“I am thrilled and delighted to return to Dyess to perform the first concert from the living room of my father’s boyhood home,” said Cash. “This exciting benefit event raises funds to continue our mission of bringing attention to the rich history of my father in the Arkansas Delta and the New Deal-era colony where he was raised. I am pleased to announce the other artists who will be joining the festival with exclusive performances of some of my father’s best-known songs.”

After successful music events in Arkansas State University’s First National Bank Arena beginning in 2011, the benefit event was expanded to a three-day heritage festival in 2017 and moved to Dyess. This year’s festival will be the first to be held virtually.

“We couldn’t be more excited by this year’s line-up,” said festival director Dr. Adam Long. “We were disappointed to have to cancel last year’s festival, and we are thrilled to be able to revive the festival in this new format that creates a unique opportunity to involve a worldwide audience and an international slate of symposium speakers.”

The theme for this year’s academic symposium is “Social Justice in the Life and Music of Johnny Cash.” Sessions will highlight Johnny Cash’s work with prison reform and his advocacy of Native American rights in his album “Bitter Tears.” Another highlight will be a behind-the-scenes look at the installation of statues of Johnny Cash and civil rights leader Daisy Gatson Bates in National Statuary Hall in the U.S. Capitol.

Registration and ticket sales are currently available at JohnnyCashHeritageFestival.com.

Ticket prices are $35 plus applicable fees for the full virtual festival, which will occur Oct. 15-16 and will remain available on-demand for ticketholders for seven days. A $75 VIP ticket includes the entirety of the virtual festival and an in-person event on the campus of Arkansas State on the evening of Oct. 15. This in-person event will feature live music, food and drink, and a screening of the concert from the boyhood home.

Original article source: http://www.astate.edu/news/lineup-announced-for-oct-15-16-virtual-johnny-cash-heritage-festival | Article may or may not reflect the views of KLEK 102.5 FM or The Voice of Arkansas Minority Advocacy Council