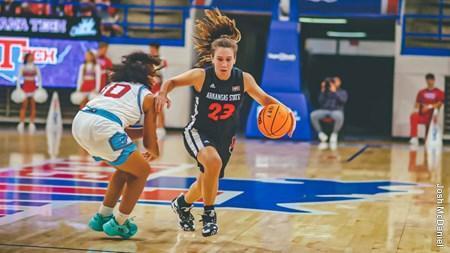 RUSTON, La. (11/10/22) – A late rally by the Arkansas State women’s basketball team fell just short on Thursday, as the team dropped a tough 59-56 battle at Louisiana Tech inside the Thomas Assembly Center.

Lauryn Pendleton and Izzy Higginbottom led A-State with 13 points apiece. Pendleton grabbed six boards and played 39 minutes, while Higginbottom handed out a game-high four assists in her debut in the Scarlet and Black. Melodie Kapinga grabbed a career-high 12 rebounds to lead all players, with fellow newcomer Anna Griffin scoring nine points to go along with five boards.

A-State started red-hot from the field, surging ahead 16-7 on one of Mailyn Wilkerson’s three 3-pointers and keeping the Lady Techsters without a field goal for nearly five minutes. LA Tech scored four unanswered to cut it to 16-11 but Pendleton hit a wide-open three to push it back out to eight. The Red Wolves led 21-16 after one.

The Red Wolves pushed their lead out to 10 within the first minute of the second after Jade Upshaw connected from deep, and then a Higginbottom lay-up and free throws by Kapinga made it 30-18. LA Tech worked the margin back down to seven on a pair of buckets by Anna Larr Roberson, who netted 10 points, giving A-State a 35-28 lead at the half.

The Lady Techsters’ lead ballooned to a dozen midway through the final period after a free throw gave Salma Bates her game-leading 17th point, but a Griffin trey sparked a 10-0 run that brought the Red Wolves back within two with just under a minute remaining. A Roberson bucket in the paint once again made it a two-score affair, but A-State had the ball late with a chance to tie down just three following a Kapinga free throw. Higginbottom’s three with 4 seconds left fell into the hands of the hosts, who held on in the final seconds to escape with the win.

Arkansas State continues its season-opening road stretch Monday, traveling to UT Martin. Tip-off inside the Elam Center is slated for 6 p.m. on ESPN+, and the game can be heard on the EAB Red Wolves Sports Network stations 95.3 and 96.9 The Ticket Radio Network in Jonesboro.

Read more here:
Late Rally Falls Short for A-State at LA Tech. Article may or may not reflect the views of KLEK 102.5 FM or The Voice of Arkansas Minority Advocacy Council