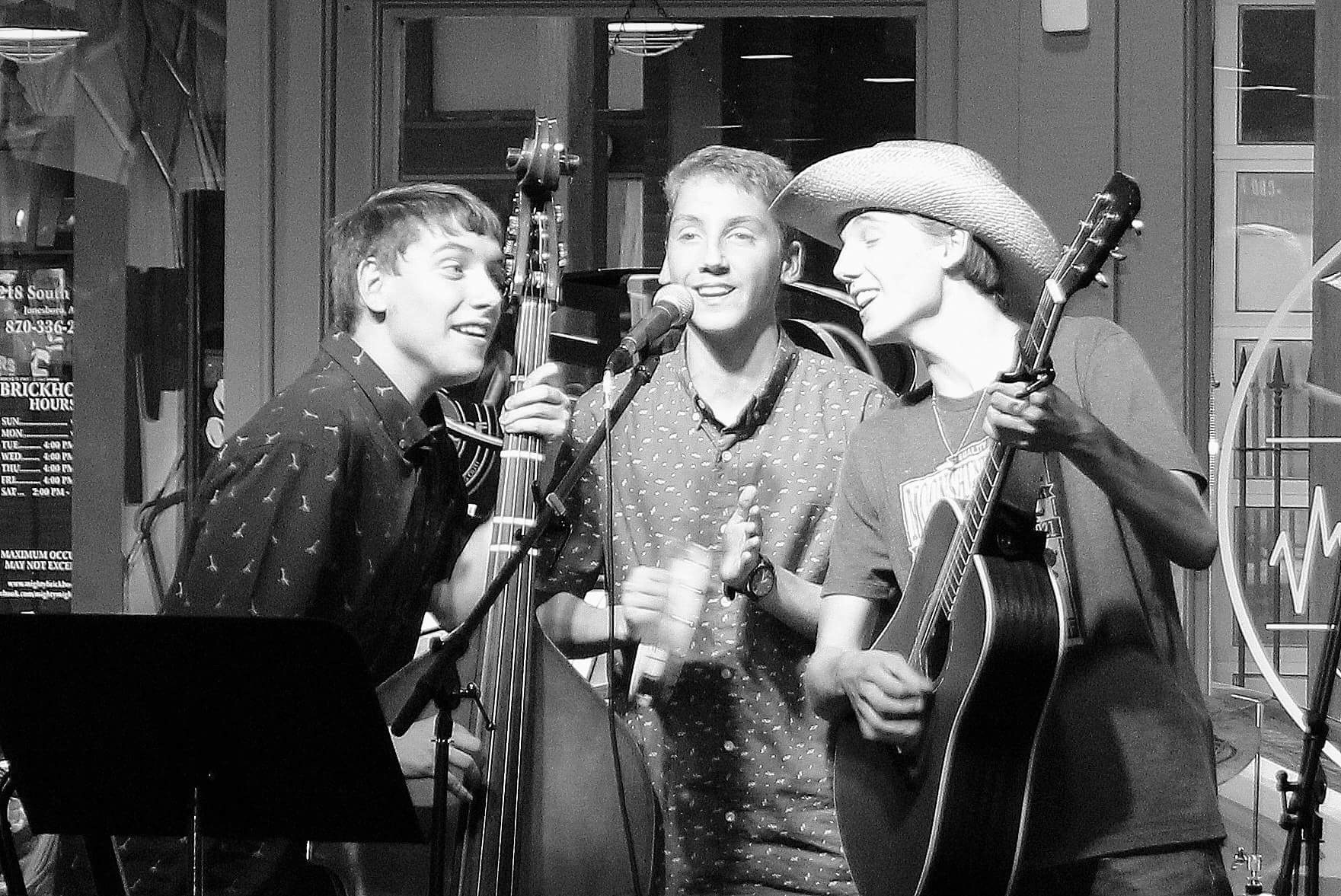 JONESBORO – Nine regional acts will take the stage Thursday and Friday, Oct. 18 and 19, during “KASU Music Nights” at the Johnny Cash Heritage Festival in Dyess.  The performances are all free and will be held at the Dyess Colony Circle.

These talented singers and musicians, most representing Northeast Arkansas, will perform after the conclusion of symposium events in the Visitors Center. Each band or artist will play a 45-minute set.

Music fans will get an opportunity to preview these bands during the Sept. 7 edition of KASU’s (91.9 FM) “Arkansas Roots” program from noon until 1 p.m., featuring songs by bands playing at the KASU Music Nights.

Hosted by KASU’s Marty Scarbrough and Mike Doyle, the show presents recordings by Arkansas musicians, past and present, in a variety of musical styles, along with a variety of features on local arts and culture. It is heard weekdays from noon-1 p.m., and Saturdays from noon-2 p.m.

Mark Currey, a Little Rock singer-songwriter, will follow at 6 p.m. A winning songwriter at the Kerrville Folk Festival, Currey has roots in Texas and Arkansas.  Each track on his album “Tarrant County” is a rich and honest expression of the Southern Gothic experience. Members of the vibrant Arkansas music scene play and sing with Currey on his CD.

Billy Jones Bluez will close Thursday evening at 8 p.m. Billy Jones, from Jacksonville, has crafted a crowd-pleasing mix of funky blues and Southern soul. A career musician, his CDs and live performances are memorable. His talent for putting together a great band is equal to his impressive craftsmanship as a songwriter and a blistering lead guitarist. He has studied with Little Johnny Taylor, Rufus Thomas and traveled the road and played with Chaka Khan and the Bar-Kays.

Opening on stage Friday, Oct. 19, is Stephen Hardy at 5 p.m. The young actor from South Carolina has portrayed Johnny Cash in touring musical productions of “Million Dollar Quartet” and “Ring of Fire.”  In his solo acoustic set, Hardy sprinkles a few Cash originals into a pleasing mix of Americana, blues, folk and country.

Marcus “Mookie” Cartwright follows Hardy at 6 p.m. A 20-something from the Mississippi port town of Helena, Mookie carries on the traditions of the solo acoustic juke joint performers who played in his home town — the site of the King Biscuit Blues Festival and KFFA radio. Mookie pays homage to Johnson, Lockwood, Williamson and other Delta legends.

Harmony begins playing at 7 p.m. From Mountain View, home of the Ozark Folk Center, this trio is aptly named because of the rich, warm harmonies they bring to traditional folk songs of this region. Dave Smith, Robert Gillihan and Mary Gillihan have presented authentic folk music to audiences throughout Arkansas for decades.

Another returnee from the 2017 festival, The Zyndall Wayne Raney Band, comes on stage at 8 p.m. These veteran musicians from the White River delta and the Ozark foothills comprise one of the Natural State’s most authentic rock-&-roll bands. Wayne, Doug, Bill, Donna, Mike and Marcus pump out the songs and tunes that kept the road houses jumping, back in Johnny Cash’s honky-tonk heyday.

Corey Jackson closes out the two-night music event at 9 p.m. After winning a talent contest sponsored by Grand Ole Opry station WSM in Nashville, Jackson and his band opened for country music legends The Oak Ridge Boys at the Wilson County, Tenn., Fair.  The young songwriter/performer has completed two albums that are selling well at his many performances.

In addition to the “KASU Music Nights” concerts, the festival will also include a symposium Thursday and Friday in the Dyess Colony Circle visitors center and food vendors, arts and crafts booths, and demonstrations throughout the three days.  The festival will wrap up Saturday with a ticketed concert in the former cotton field adjacent to the Johnny Cash Boyhood Home.

Also, performing is Ana Cristina Cash, an American singer-songwriter; Bill Miller who performed at the first Johnny Cash Music Festival in 2011; and Shawn Camp, who won a Grammy in 2014 for Best Folk Album of the Year and who wrote songs for the ABC-TV show “Nashville.”

Tickets for the benefit are on sale at the Arkansas State University Box Office, First National Bank Arena, (lower red entrance), 217 Olympic Drive. To purchase online, visit the festival website, JohnnyCashHeritageFestival.com, and click on “Buy Tickets,” or contact the box office at (870) 972-2781 or (800) 745-3000. All reserved seating at the Saturday afternoon concert is $100 plus applicable fees, and general admission tickets are $35 plus fees.

The festival is coordinated through Arkansas State University Heritage Sites and the Heritage Studies Ph.D. program and is licensed through the John R. Cash Revocable Trust. Presenting sponsors include the Electric Cooperatives of Arkansas and the Judd Hill Foundation.

Original article source: http://www.astate.edu/news/kasu-music-nights-includes-nine-acts-at-johnny-cash-heritage-festival | Article may or may not reflect the views of KLEK 102.5 FM or The Voice of Arkansas Minority Advocacy Council