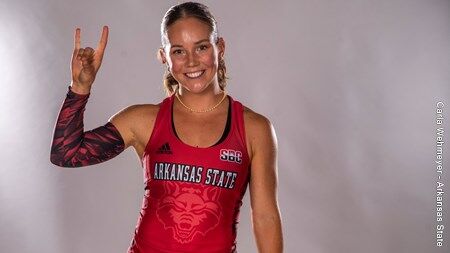 JONESBORO, Ark. (12/8/22) – Another highly-anticipated indoor track and field season begins Friday for the Arkansas State track and field teams, which are set to compete in a pair of meets in Pittsburg, Kansas.

A trio of athletes get things started for the three-time defending Sun Belt Conference champions at the Boo Rogers Combined Events, beginning Friday at the Robert W. Plaster Center.

Isabel Daines competes in the pentathlon, while newcomers Patryk Baran and Colby Eddowes compete in the first four events of the heptathlon before finishing the seven-event competition on Saturday. Action begins at 1 p.m. Friday with the pentathlon 60-meter hurdles.

In addition to the final three events of the heptathlon, which begins at 9 a.m., Saturday will also see over 40 A-State athletes compete in the Crimson and Gold Invitational. Action begins at noon with the men’s weight throw and women’s shot put, while the first event on the track for Arkansas State will be the women’s 60-meter hurdles.

Read more here:
Indoor Season Begins Friday for A-State Track and Field. Article may or may not reflect the views of KLEK 102.5 FM or The Voice of Arkansas Minority Advocacy Council