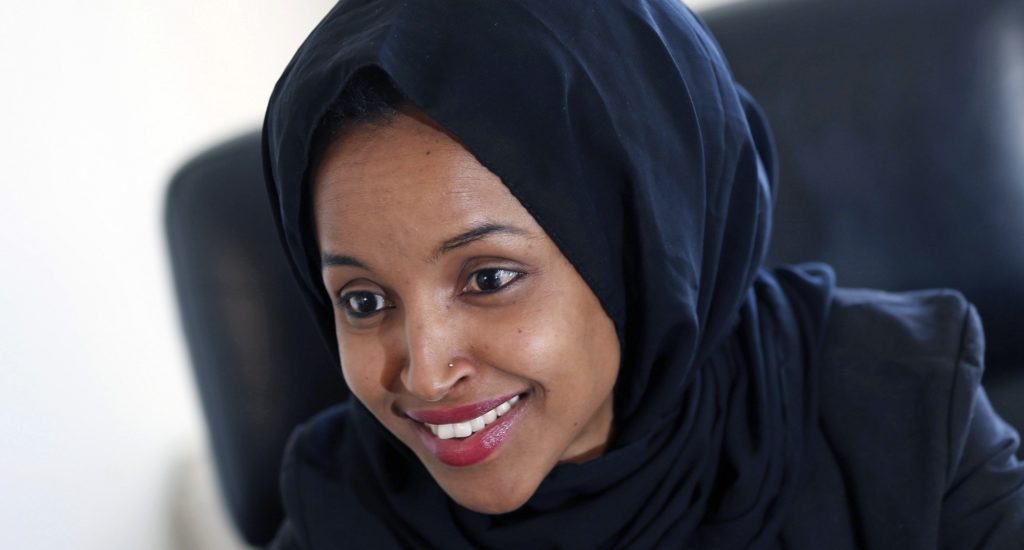 In this Thursday, Jan. 5, 2017 photo, new State Rep. Ilhan Omar is interviewed in her office two days after the 2017 Legislature convened in St. Paul, Minn. Omar is the first Somali-American to be elected to a state legislature in the U.S. The 33-year-old wife, mother, refugee and immigrant reflected on her many roles and how she’ll try to voice and inspiration for denigrated minority communities like her own. (AP Photo/Jim Mone)

Just two years ago, Minnesota Democrat Ilhan Omar became the first Somali-American elected to a state legislature. Now she is likely to become one of the first two Muslim women elected to Congress. And she says one of her top priorities will be resisting the Trump administration, which would forbid her from entering the U.S. if she were attempting to immigrate today.

“I myself would have been part of the travel ban,” Omar said on the campaign trail.

Her victory in Tuesday’s Democratic primary for a House seat from the immigrant-rich Minneapolis area depended heavily on support from people who feel persecuted in Trump’s America and voters who empathize with them. No Republican has won the heavily liberal district since 1962, making the primary the de facto election, though Omar will face Republican candidate Jennifer Zielinski in November.

Winning the seat will position Omar as a new national voice against administration policies. The seat opened up when Rep. Keith Ellison, the first Muslim elected to Congress, launched a last-minute bid for attorney general after serving six terms. Omar’s victory over a crowded field marked the latest milestone in the meteoric political rise of a woman who spent her childhood in a Kenyan refugee camp and immigrated to the United States at age 12. She won her seat in the state House in 2016. On Tuesday, she defeated two more experienced candidates — former House Speaker Margaret Anderson Kelliher and state Sen. Patricia Torres Ray — as well as another Somali-American. During the campaign, Omar often addressed the country’s divisions.

“There is a clear and dangerous crossroads to where our country finds itself,” she told a group last month at a coffee shop. “You can see the politics of fear and scarcity that’s led us to the current administration we have.”

Omar was not giving interviews Wednesday, her campaign said. Supporters cheered on the hijab-wearing candidate when she took the stage Tuesday night to claim victory. She recalled how she was just 8 when her family fled the civil war in Somalia and described what her win would have meant to that 8-year-old girl in the refugee camp.

Original article source: http://aurn.com/ilhan-omar-poised-to-become-first-female-muslim-congress-member/ | Article may or may not reflect the views of KLEK 102.5 FM or The Voice of Arkansas Minority Advocacy Council