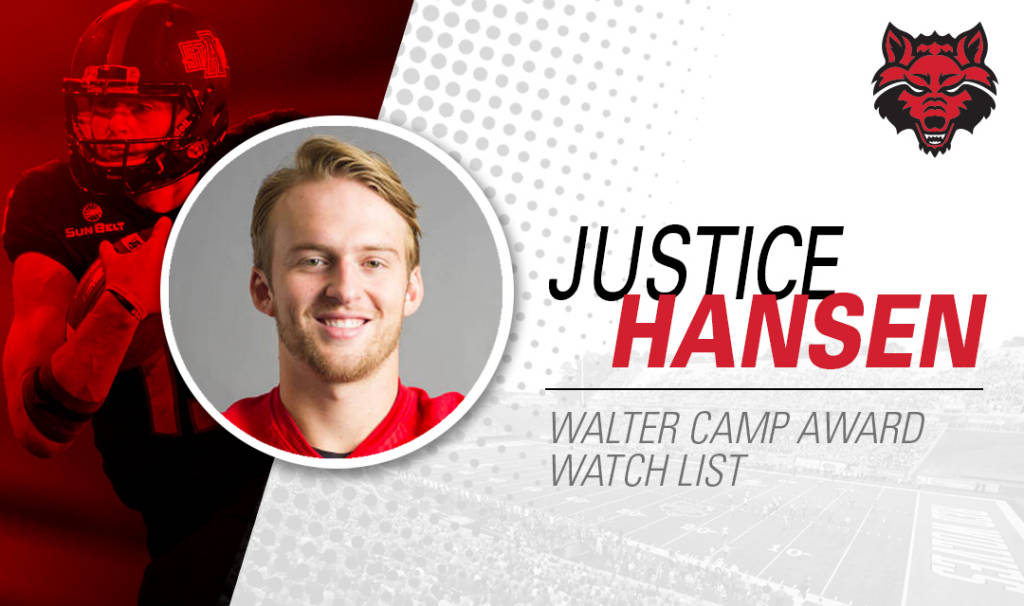 Hansen, who has already racked several preseason awards as the team prepares to open up fall camp on Aug. 3, enters the season ranked second all-time in passing touchdowns, while also ranking fourth in in completions, passing yards and total offense. Earlier this summer he was on the Sporting News list of “College Football’s Top 25 Quarterbacks for 2018” and was USA Today’s No. 2 ranked player in its “10 Best College Football Quarterbacks in Group of Five Conferences.”

Hansen is coming off a 2017 campaign that saw him receive a combined 10 conference or national weekly awards following six different games. He earned a Manning Award Star of the Week nominations after his performance against Louisiana-Monroe on Nov. 25 in which he threw for 520 passing yards and racked up 550 yards of total offense.

The Edmond, Okla., native joins Ryan Aplin (2012) and Qushaun Lee (2014) as the only other student-athletes in A-State history to be named to the watch list.

The watch list will be narrowed to 10 semi-finalists in mid-November. The 2018 Walter Camp Player of the Year recipient, which is voted on by the 129 NCAA Bowl Subdivision head coaches and sports information directors, will be announced live on ESPN on Thursday, December 6.

Original article source: http://www.astateredwolves.com//ViewArticle.dbml?DB_OEM_ID=7200&ATCLID=211736385 | Article may or may not reflect the views of KLEK 102.5 FM or The Voice of Arkansas Minority Advocacy Council