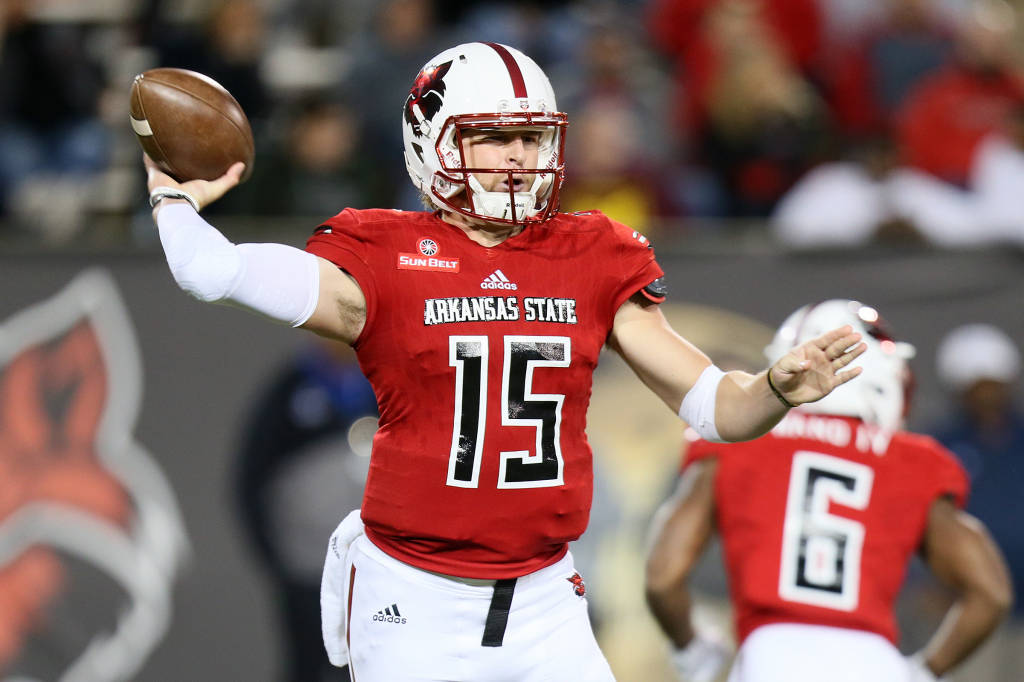 Hansen finished the night 17-of-28 passing for 257 yards and three touchdowns as he now holds the school record with 70 career passing touchdowns. He added 76 rushing yards and two scores to his night as the A-State (4-3, 1-2 SBC) offense produced a season-high of 273 yards rushing while finishing with 530 yards of total offense.

The Red Wolves defense forced two Georgia State (2-5, 1-2 SBC) turnovers, turning those into 14 points. Darreon Jackson had a game-high eight tackles while Ronheen Bingham had two sacks and two pass break-ups. A-State had eight tackles for loss on the night including four sacks.

“It felt good to get back into the win column after a tough couple of losses, but I thought our guys handled that situation really well,” said A-State head coach Blake Anderson. “I think at a lot of places there would be panic setting in and some frustration, but they did a good job. We had one of the best weeks of practices that we’ve had with this group and a lot of guys took ownership of the mistakes that we have been making. We’ve had some very physical and energetic practices and I think it showed tonight in all three phases.”

“We still have some mistakes to fix, but I thought it was the most complete game we have played all season and it came at a good time. Now we can just focus on being 1-0 each week and taking the steps we need to take to get to where we need to be.”

Hansen opened the game 3-for-3 passing with his third pass finding an open Javonis Isaac for an A-State touchdown just over three minutes into the game. With the touchdown pass, Hansen established the program record for career touchdown passes with 68, but Hansen quickly added to his record.

An offside penalty kept a Georgia State drive alive and the Panthers scored on the next play to tie the game at 7-7 with 7:09 to play in the first quarter. The Red Wolves quickly answered as Wand returned a kickoff 91 yards. A 9-yard keeper by Hansen made it 13-7 and he connected with Jonathan Adams Jr. for a 35-yard touchdown pass increasing the lead to 20-7 with 2:39 to play in the first half.

The Red Wolves scored found the end zone for the fourth time over the first five drives with McInnis hauling in a 6-yard pass in the corner of the end zone. Tajhea Chambers scooped up a Georgia State fumble and returned it 34 yards giving A-State a 34-7 lead.

The two teams traded scores in the second half with the Red Wolves posting the 51-35 decision. Hansen accounted for his fifth touchdown of the night with a 22-yard touchdown run making the Red Wolves lead 41-21 at 4:08 of the third quarter. Marcel Murray rushed for a nine-yard score early in the fourth quarter and Blake Grupe connected on a 31-yard field goal to cap the scoring for A-State.

A-State travels to Lafayette, La., to take on the Ragin’ Cajuns on Saturday, October 27 with kickoff set for 6:00 p.m. on ESPN+. The Red Wolves return to Centennial Bank Stadium on Saturday, November 3 for homecoming against South Alabama. Kickoff in that game is scheduled for 2:00 p.m. on ESPN+.

Original article source: http://www.astateredwolves.com//ViewArticle.dbml?DB_OEM_ID=7200&ATCLID=211776607 | Article may or may not reflect the views of KLEK 102.5 FM or The Voice of Arkansas Minority Advocacy Council