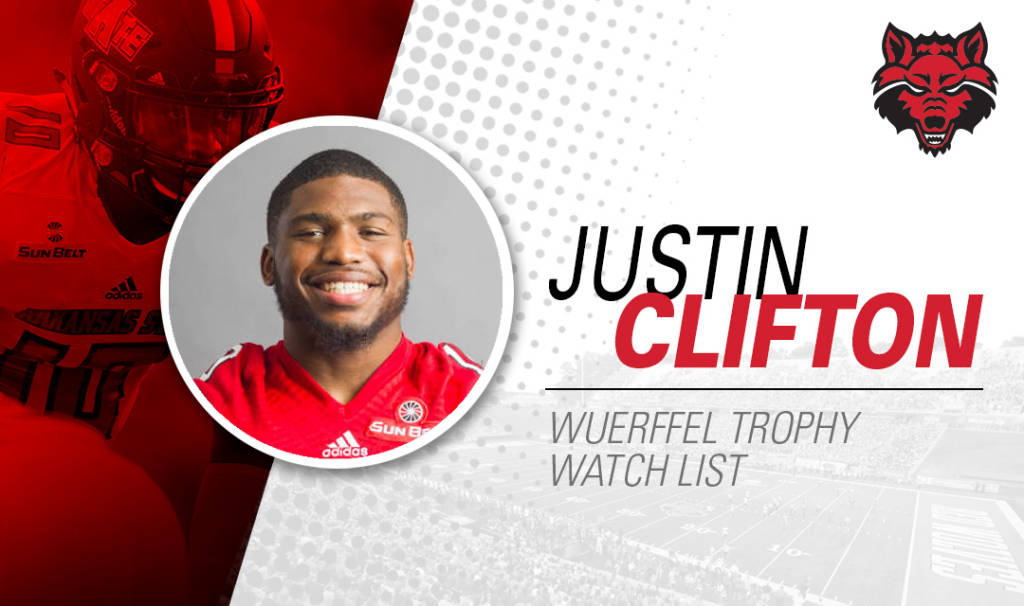 JONESBORO, Ark. (7/26/18) – Arkansas State seniors Justice Hansen and Justin Clifton have been selected as preseason candidates for the 2018 Wuerffel Trophy.

The pair have been active in several community service projects since coming to Jonesboro and have been leaders in organizing events for fellow teammates. They have also participated in charity events such as a “Feed the Children” project at the 2016 AutoNation Cure Bowl as well as Special Olympics and reading programs in the Jonesboro area.

On the field, Hansen is coming off his best season as the A-State quarterback which saw him throw for 6,686 yards, run for 553 yards and toss 56 touchdown passes. He was named the 2018 Sun Belt Conference Preseason Offensive Player of the Year and has also been named to the Maxwell Award and the Davey O’Brien Award Watch Lists.

Clifton started every game a nickel cornerback in 2017 and posted multiple tackles in all 12 of A-State’s games. He finished third on the team with 63 tackles and also added 4.5 tackles for loss, while breaking up a career-high 13 passes. He named the best overall defensive player in the Sun Belt by SB Nation and was a 2018 All-SBC Preseason First-Team selection. Earlier this year he was named to the Thorpe Award and Nagurski Trophy Watch Lists.

This marks the first time in A-State history that is has placed two athletes on the Wuerffel Trophy List. Most recently, Blaise Taylor, was a semifinalist for the award 2017, while former quarterback Fredi Knighten appeared on the list in 2015.

The Wuerffel Trophy, known as “College Football’s Premier Award for Community Service,” is presented annually at the All Sports Association’s Awards Banquet in Fort Walton Beach.  Named after 1996 Heisman Trophy winning quarterback Danny Wuerffel from the University of Florida, the Wuerffel Trophy is awarded to the FBS player that best combines exemplary community service with athletic and academic achievement.

Original article source: http://www.astateredwolves.com//ViewArticle.dbml?DB_OEM_ID=7200&ATCLID=211736149 | Article may or may not reflect the views of KLEK 102.5 FM or The Voice of Arkansas Minority Advocacy Council