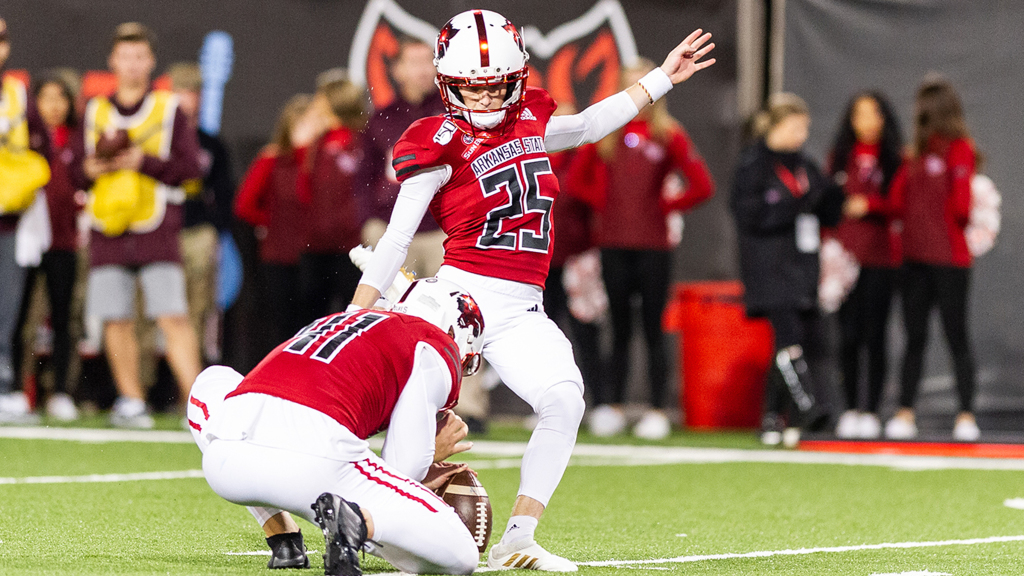 Grupe tied his career high for field goals made in a game and was a perfect 3-of-3 on extra point attempts.  He made all three of his field goal attempts covering 40, 23 and 20 yards.  His 12 points were only one shy of his career-high 13 and made him just the second Arkansas State player to ever post 100 points by kicking in a single season.

Not only did Grupe take over second place for most points by kicking (100) in a season at A-State, he increased his field goals-made total to 17 to tie the third most in school history.  He has now made 43 consecutive extra points to tie the fourth longest streak in school history.

The Sedalia, Mo., native increased his career numbers to 177 points by kicking and 31 field goals made to move him into sixth and seventh place, respectively, all-time at A-State.

This season, he leads the Sun Belt with an .850 field goal percentage that also ranks tied for 19th in the nation.  His 1.42 field goals made per game is tied for first among Sun Belt players and tied for 27th in the country.  Additionally, his 8.3 scoring average is tops among all kickers in the league and ranks tied for 14th nationally in points by kicking.

Original article source: http://www.astateredwolves.com//ViewArticle.dbml?DB_OEM_ID=7200&ATCLID=211816627 | Article may or may not reflect the views of KLEK 102.5 FM or The Voice of Arkansas Minority Advocacy Council