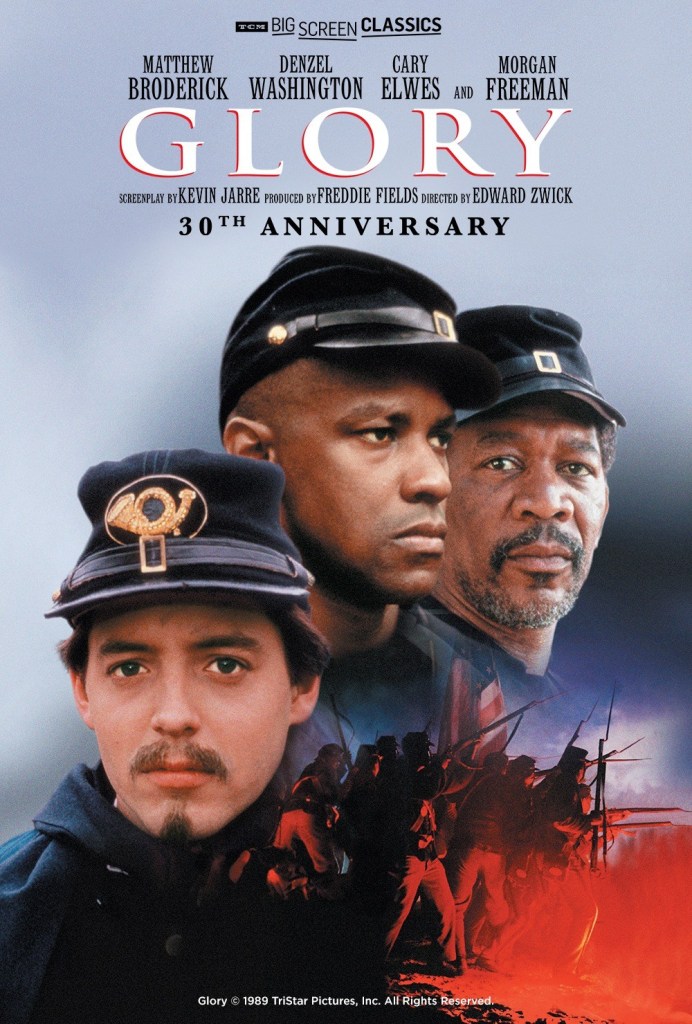 Denzel Washington earned his first Oscar® – as Best Supporting Actor – in the sweeping Civil War epic GLORY for his intense, passionate performance as Private Silas Trip, a formerly-enslaved man who volunteers to be part of the 54th Massachusetts, one of the first Union regiments fully comprised of black soldiers.

The film also stars Morgan Freeman, as Sergeant Major John Rawlins, Andre Braugher, Jihmi Kennedy and Matthew Broderick as Col. Robert Gould Shaw, who assumes command of the regiment – which by law could only be led by a white man.

Edward Zwick directed and Kevin Jarre wrote the screenplay based on the 1965 novel One Gallant Rush by Peter Burchard and the 1973 book Lay This Laurel by Lincoln Kirstein and Richard Benson.

For the first time since its initial release in 1989, GLORY is coming back to movie theaters nationwide for two days this month to mark the film’s 30th anniversary.

Fathom Events and the TCM Big Screen Classics series are presenting GLORY in more than 600 movie theaters on July 21 and July 24 only — 156 years after the Second Battle of Fort Wagner, the Union push on a Confederate stronghold that forms the film’s climax (and which began on July 18, 1863).

HOW TO WIN A PAIR OF TICKETS AT A THEATER NEAR YOU:

Submit the following to [email protected] by 8PM PST/11PM EST on July 17. Five winners will receive one pair of tickets each via email or cell phone by end of day July 19.

If you enter our giveaway contest, but are not among the five winners, do not despair – you can still see the movie! Tickets are on sale now at the Fathom Events website and at participating theater box offices.

Tickets for Glory can be purchased at www.FathomEvents.com or participating theater box offices. Fans throughout the U.S. will be able to enjoy the event in more than 600 movie theaters through Fathom’s Digital Broadcast Network (DBN). For a complete list of theater locations visit the Fathom Events website (theaters and participants are subject to change).

Glory debuts on 4K Ultra HD disc and in 4K with HDR via participating digital platforms on July 30, 2019.

Original article source: https://goodblacknews.org/2019/07/14/gbn-giveaway-win-movie-tickets-to-30th-anniversary-re-release-of-glory-starring-denzel-washington-and-morgan-freeman/ | Article may or may not reflect the views of KLEK 102.5 FM or The Voice of Arkansas Minority Advocacy Council